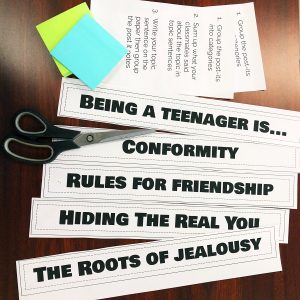 Whenever I start a new text, I always begin with a pre-reading exercise that gets students engaged in the ideas we will explore in whatever it is we are about to read. I wrote about this process before, on this post, but now I’d like to tell you about how and why I tweaked it for making text to text connections.

We’ve been doing reading workshop since the first of the semester and are about to do our first full class novel. I’d do workshop forever, but this is a pre-IB class, and I need to get them used to the way we will approach novel study next year.

We are going to read A Separate Peace together and then do book clubs that focus on some of the same themes, so I decided that after we did the initial activity, it would be the perfect time to make some text to text connections.

You can read the details on this post, but here is the procedure:

First I gave each student five post-it notes (I put them on their desks while I was cleaning them between classes). Then, one at a time, I introduced the ideas we would be exploring. The first was “Being a teenager is hard.” I told them to write down one word or phrase that they thought of when they saw that sentence on one of the post it notes. Next, they did the same for “rules for friendship” and so on. 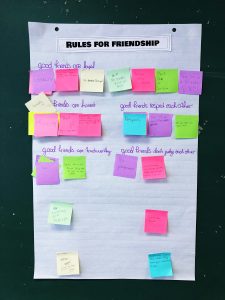 While they were doing their work, I put up pieces of chart paper that had each idea on the top of the page. I spread them out throughout the class and the hallway, and the kids had to put their post-it notes on the appropriate poster (they were masked and we did this safely!).

Finally, I grouped students and they worked to group the post-its into categories and create subheadings based on what their classmates had written. Once again, you can get the details on this post.

Making the Text to Text Connections

This part of the activity came about accidentally. Originally, I was planning to use We Were Liars  as a class text and had discussed this with a student who had already read it. As they were doing this activity, I realized that she thought it was to introduce that text.

When I looked at the topics I had a little chuckle at my own expense. Even though I’ve chosen texts for our book club because of common themes, I didn’t even think about that when I was planning this activity. So, on the fly, I added another part to this exercise.

The plan was always to do a gallery walk to see how the groups had organized the stickies, but this time I told them to think about one of the novels they had read this semester, and to decide on one idea that related to it the most.

Writing about the Connections

When my students went back to their seats, they got out their journals, and I asked them to write about how one of the ideas is explored in the novel they chose. After a few minutes I told them to add in how they can relate to the concept themselves, so we got some text to self connections as well.

This is a concept we explored earlier in the term when students discussed universal themes in their independent novels. Making these connections is an excellent exercise in critical thinking and a wonderful opportunity for students to hear about other great texts that they might like to read as well.

The end result of these activities is that my students are ready to begin reading the novel knowing that it will connect to ideas that they can relate to. They will be able to look for them as they read because I’ve already told them they are there.

This will set them up for success because they aren’t blindly reading, hoping they can find the themes. Or looking up “Themes in A Separate Peace” on Sparksnotes.

Later, when we do our book clubs, we will make other connections too. We’ve worked a lot on narrative technique and perspective, and all of the texts I’ve chosen have a unique way of telling the story. We will also be exploring prejudice and conflict (external and internal), so this novel and its themes will be a good springboard into the more independent study of the book clubs.

I’m looking forward to it, and I’ll keep you posted! Let me know in the comments if you have any questions.