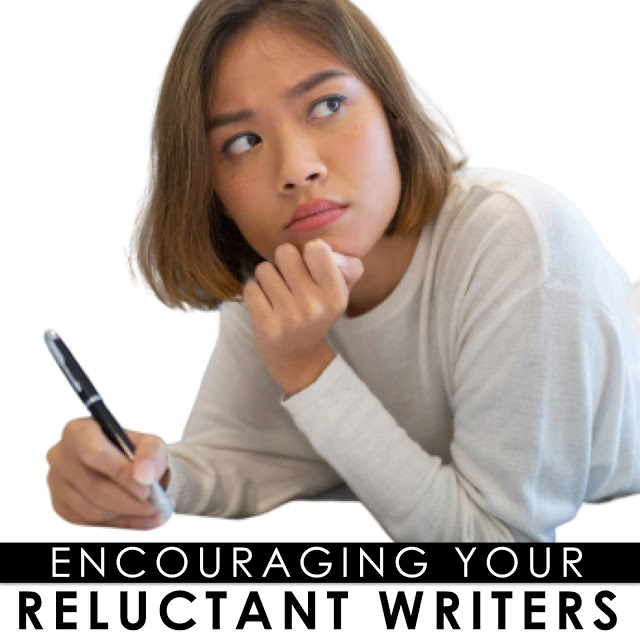 You’ve created the perfect lesson plan. Your kids are engaged in the writing activity… all except a handful. You know them, the ones who refuse to write no matter what you ask them to do. Encouraging reluctant writers to pick up the pen can be hard, but with a few simple strategies, you just might them get started.

Let me start by telling you about Lucas. He was a senior in my class who was convinced that he could. not. write. When I assigned anything – from a simple journal entry to an essay – he would sit there, starting into space. When I tried to get him to start writing, he would state, categorically, “I can’t. I just can’t write.”

By the end of the semester, though, he was producing some pretty good work. He still didn’t like it very much, but he was writing.

So what did I do? I tried a few strategies that I’ve been honing over the years, ones that I know from experience will work with a lot of kids. Every student is different, of course, but if you try some of these, you’ll get more students writing:

Give them choice – but not too much:

There is no question that when we give our students choice, many will flourish and find their voices. Giving high interest topics and/or free choice is just good practice.

However, some reluctant writers struggle with this – they can’t think of an idea, or they fear their ideas are “stupid.” If you think this is the case, help your students come up with a subject. Use what you know about them to find a topic that they will engage with.

Lucas, for example, was an outdoorsy guy who loved to work with his hands. His passion was snowmobiling so, after a few desk-side discussions that began with “I have no idea” or “I don’t know,”  he ended up writing his narrative essay about the time he ran out of gas far from home and had to abandon his snowmobile and walk home. Once he got confirmation from me that this was a “cool” thing to write about, he began to think he could do it – and his narrative was very well done.

It’s good practice to use mentor texts for all students, but reluctant writers really benefit from being able to see what a finished product will look like. They can mimic the structure and style of the the mentor text, using it as a support to create their own piece. Many reluctant writers can’t envision what the end product will look like. This overwhelms them and prevents them from even starting, so that finished product gives them something to aim for.

Starter sentences are also an effective tool for reluctant writers. Give them ideas for ways they can start their sentences or paragraphs; this will help them get started and gain the confidence they need to experiment with their own sentences in the future. One really effective activity I’ve done prior to assigning a personal narrative is using a fun activity where I give students task cards with ideas to get them started.

Encourage reluctant writers to take it one step at time:

The secret with Lucas was to show him how to take things one step at a time. He got very overwhelmed with the idea of a complete product, so instead of focusing on the fact that he had to write a whole essay, I told him that we were going to take it slowly, even if that meant he needed a little more time to get it all done.

Once he got over the hurdle of choosing a topic, his next task was to create an outline. We didn’t talk intros or paragraphs or anything other than brainstorming ideas. I would tell him that all I wanted him to do was to create the outline – and when he did, I’d move the goal post. I’d tell him that now that he had a plan, it was time to think about a great lead.

After he had that, we’d focus on writing one paragraph. Basically, each class we set smaller goals for him than the other students had. And, once he found his rhythm and got over the stress and overwhelm, he often surpassed his goals and got as much done as the rest of the kids.

I conference with all of my students, but I had more with Lucas, the kind where I just pull up a chair and have a chat. (He was not at all put off by talking in front of his classmates, but if you suspect that the student doesn’t want others to hear, find a time and place to have a private conversation).

These one-on-one conversations are invaluable because most kids will open up far more when you are having a private chat. They don’t have to happen during a special conferencing time, either. You can just squat down beside the student or pull up a chair while the rest are working.

Give focused feedback that builds confidence:

Last, but certainly not least, be very careful with your feedback. Reluctant writers usually believe that they are bad at it – and no one wants to do something that is going to be judged when they feel like they are going to fail. For example, I am terrible at golf. If I knew that someone was going to watch me tee up and then give me a grade on it, I would be very unhappy and reluctant as well. But if I had a patient coach, ready to help me get better without focusing on how terrible I was, then I’d be MUCH more willing.

Here are the things I keep in mind when providing feedback to reluctant writers:

> Celebrate what they did well: When I told Lucas how proud I was of his finished products and picked out a few things that I really liked, I could literally see his chest swell. Even when the kids were doing a group exercise, I’d make sure I’d find an opportunity to give him an encouraging comment, like “great idea, Lucas!”

The red pen is a powerful weapon, one that can sometimes do more harm than good. Yes, it’s our job to teach mechanics and to help students improve, but if students can’t get an assignment done because they are worried that their spelling and grammar is bad, they will never improve. These things will improve with time and practice, though. Be patient and get their ideas flowing first. Then, you can tackle the fragments and comma splices.

> Give only a few things to improve:

When the assignment comes back, tell the student what they did well, and give them one or two things to improve, not a laundry list. I used to feel like I had to justify a grade with “all of the things,” but that list can be pretty discouraging.

Now, I pick the one or two improvements that will make the biggest difference for a student. For example, I might suggest that they need to start adding more specific examples to flesh out their ideas. I don’t add that they need transitions, sentence variety, stronger word choice, and a more engaging opening because then they just get overwhelmed and discouraged. Go back to my golf example. If my coach listed ten things I needed to do to get that ball to the green, I would probably put the club back in the bag. But, if she told me one thing to work on to do better the next time, I would be more likely to swing again.

I get this one, believe me. I was there for many years. The standards will still be there; you’re just taking things more slowly with these students and coaxing them out of their reluctance, so they can grow as writers. You can’t work with them when they can’t produce. They can’t learn and grow when they are paralyzed and overwhelmed. Like a baby learning to walk, you need to hold their hands and smile and encourage as they take their first steps. You step back and stay close in case they fall. You keep moving back as they take a few more steps. It might take one baby longer to get there, but in the end, everyone is off and running.

Do you have any tips? Anything that has worked for you in the past? Please let us know in the comments.