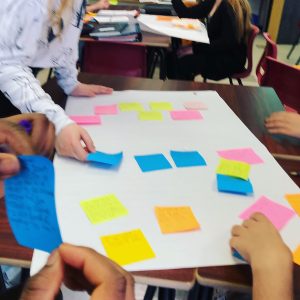 Often, the most successful activities in my classroom are those where we make student thinking visible. Deeper learning happens when I pull back the curtain on the process students need to follow, so they can clearly see what needs to be done.

And because they have a clearer idea of how to do it, they produce much better work.

In the past, whenever I gave students a complex task, like literary analysis, there was always a struggle. Some would sit there, somewhat paralyzed, because they just couldn’t figure out where to start. Others would go through the motions, but just skate over the surface, missing many of the important elements of the text. Usually only a few would take off and give me amazing work.

Often I’d blame this on lazy thinking. However, once I realized that it might just be the result of the inability to “see” how to complete the task, I did something to change that. When I did, my students were suddenly feeling more confident and ready to work.

👉🏻 Here are three of my favorite ways to do make thinking visible for my students (the lesson plan for each one is part of my Active Learning Exercises (Click here for a preview and a FREE active learning exercise):

Literary analysis is far from easy for most of our students, so I make sure I scaffold the process with them. First of all, I model how to close read and give them lots of opportunities to collaborate with each other when they do. And, after we read a chunk of a text, we do activities that help them visualize the process of analysis. 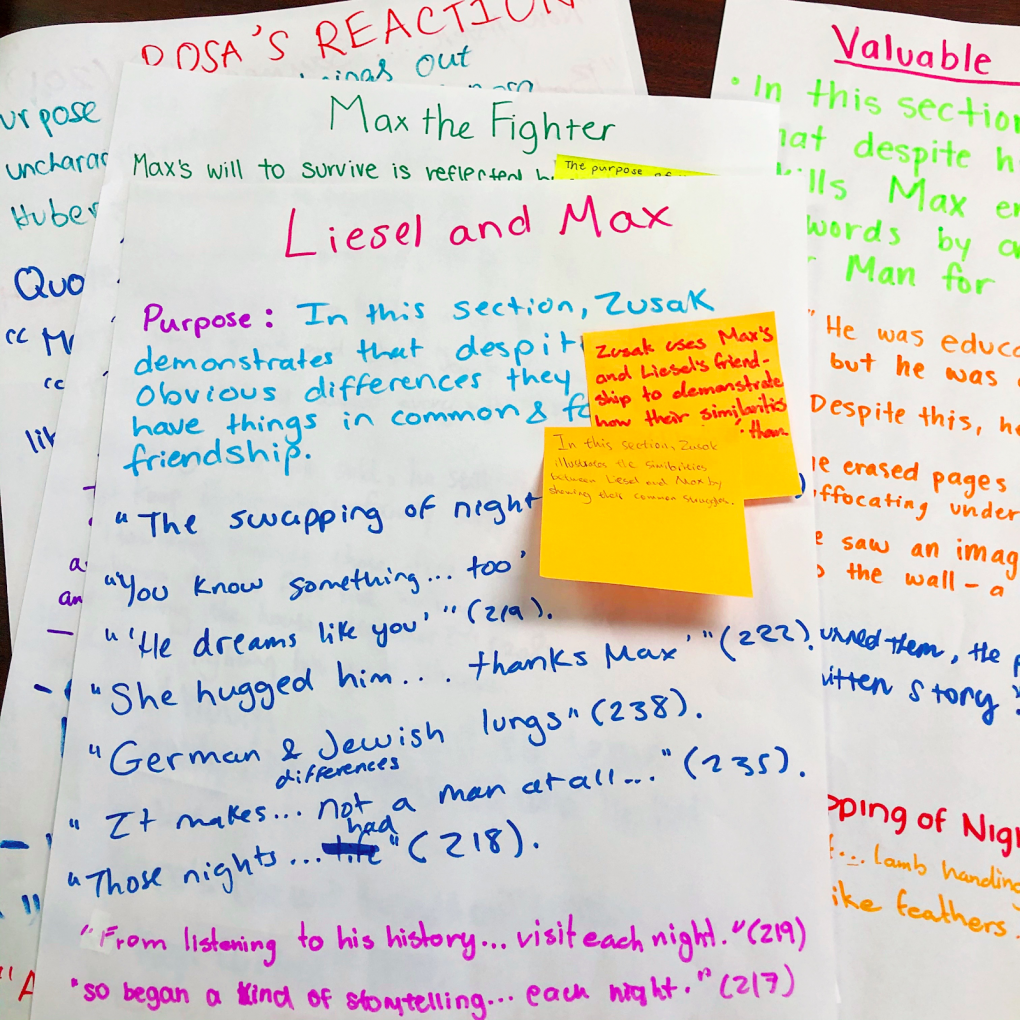 For example, after we read a section of The Book Thief I asked students to decide which elements of the section were most important. I assigned each group one of these sections and had them brainstorm assertions that stated the purpose of the section.

They chose their best one and wrote it on a piece of 11 x 17 paper. Then, they began adding evidence to support the assertion.

After several minutes, I they passed their sheet to the next group, who had to add more evidence to the sheet. And, if they didn’t like the original assertion, they wrote a new one on a sticky note and added it to the poster.

We did this a couple of times, and each time, the new group used a different colored marker, so I could see who did what.

Finally the poster went back to the original group, so they could see what was added. Then, each student had to choose one quote from the page and write a statement that explained how it supported their statement about author purpose.

When they were all done, the students could see the process that they need to follow to fully develop an assertion with multiple pieces of evidence. 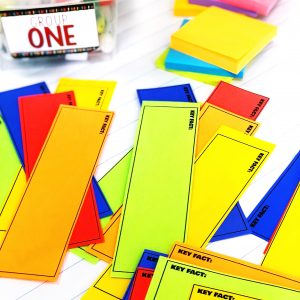 One of my missions this semester was to get my IB students to zero in on key facts in a section and to make their assertions about the text based on those facts. I want them to learn to filter what’s important for understanding author purpose, so they can get better at taking notes while they read.

They’ve worked a lot on this, and when they finished The Book Thief, I had them use key facts to create a mind map to help them figure out Zusak’s purpose in the last few sections of the novel.

We began the activity with the students brainstorming the key facts from the section. Then they chose the ones they believed to be most important and wrote them on the “key fact strips” I gave them.

Next, I explained that I wanted each group to create a mind map poster, one that would take a viewer through the group’s thought process as they tried to decide on the overall purpose of the section. I told them they could put the poster together whatever way they wanted, but the assertion should be at the top, and they needed make their thinking very visible.

Not surprisingly, they all had a very similar assertion, but it was fascinating to see how they all explained it, and which facts and evidence they chose to use as support. Their approaches to creating the poster were different too, but regardless of how they did it, each group was actively thinking, discussing, and learning as they did their mind maps.

When they finished, each group did an informal presentation of their poster to take their classmates through their thinking process, and by the time we were done, everyone had a much better understanding of that section of the novel.

Another visible thinking strategy I used during our study of The Book Thief was hexagonal thinking, a powerful strategy to get students to see the connections in their texts. (Get your version here).

I gave each group a set of shapes with the names of major characters, themes, and events in the middle 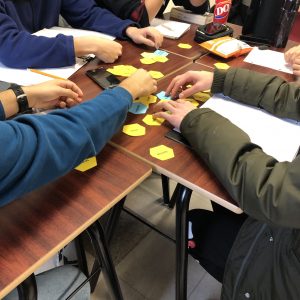 of them. Each student had to randomly grab three to five of them and put them together on a sheet of paper (they did not glue them down). Then, they had to brainstorm all of the connections they could see.

After they did their individual work, they shared their ideas with group members. At that point they tried to find other connections and put these shapes together in the middle of the group.

When they finished I asked them to decide which was the most interesting connection and to share it with the group.

Because they will need to write a compare and contrast essay at the end of the term, I added another layer to this, and gave each group a handful of shapes, in different colors, from the other two texts we’ve read (Night and Antigone). Then they had to try to add at least one of them to the connections they’d found in The Book Thief.

As they did this, they wrote down the connections they found and we repeated the process above. Want to try it with your students? Click here.

Each of these activities was effective for the same reasons: they allowed the students to clearly see a learning process in a way that just talking about text does not. Also, the kids love the interactive nature of these activities, so it really ups the engagement factor!

What are your favorite visible learning activities? Let us know in the comments! And, if you’d like a whole pile of active learning lesson plans, click here or here for a preview and a FREE active learning exercise