A Socratic Seminar that Really Worked

It was the second last Friday before Christmas and the day after a school dance. I knew I needed something engaging for my seniors, or the class would be a struggle. I also needed some more speaking and listening activities, so I decided to do an impromptu Socratic seminar – and it was one of the best things we did all year.

We’ve just finished Animal Farm, and we’ve been making some real world connections. So, I decided to do an informal seminar that could allow them to apply their learning. 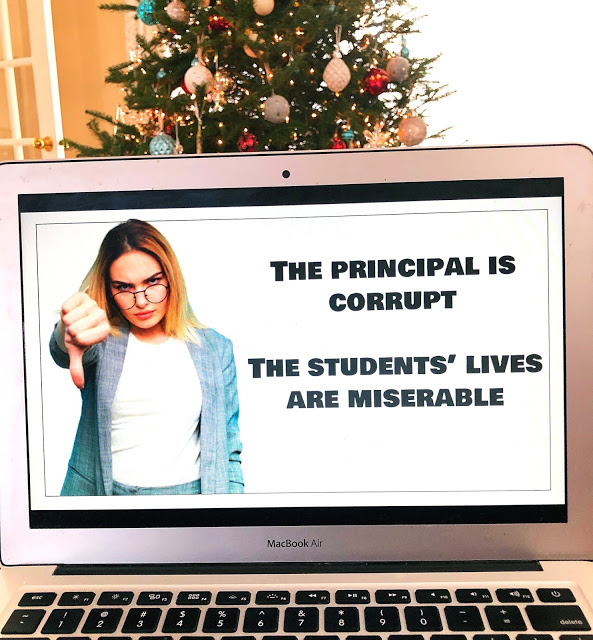 I created a slide show that set up the (fake) concept that our school had gone to the dogs. The principal is corrupt and things are terrible for everyone in the building except a few select adults. When my students came into the class, their chairs were in a circle so they could face each other, and I had the first slide projected on the screen.


I explained the situation and told them to plan a takeover. They needed to discuss the problems and solutions and come up with some guiding principals for a new and better school. Then, I sat back and said nothing else.

But I took notes of what happened.

Right away, the leaders in the class started talking and sharing ideas. This sparked some of the more quiet students in the class to speak up, even a few that surprised me. They were immediately engaged in the topic and had a very insightful discussion (I told them they could not use any names, by the way). They quickly identified some problems in the school and came up with some very creative solutions.

I sat back and proudly listened. The plan was to let them read for a good chunk of the class after they’d finished, but they were so engaged, they talked the whole period! However, I did cut them off with a few minutes left to make the connections to Animal Farm. I asked them to think about their individual participation in the seminar, and to decide which animal they were most like. Were they a pig who took over and started to plan and organize? Were they a persuasive Squealer? A Clover who couldn’t really put her ideas into words? Or a Benjamin who thinks that nothing will really change anyway?

I made it clear that there was nothing wrong with being a leader who takes charge, or someone who can’t always think of the right thing to say. The novella is about people who allow power to corrupt them or their abilities to hold them back. We need leaders and followers, speakers and listeners for our wonderful world to work. As long as we all work together for the greater good and stand up to corruption, things will work out.

This activity was a huge success on a day when I thought I’d get little out of my students. And it’s one you could use, whether you’re doing Animal Farm or not.