Would you like to spend less time grading student work? I think it’s a pretty safe bet to say that grading assignments is the least favourite part of your job. I know it’s mine. However, I have learned ways to work smarter, not harder.

Over my decades of teaching, I spent countless hours just dreading the idea of attacking a pile of papers and even more hating the process of reading them. But you know what? I don’t mind it nearly so much anymore.

That’s because I’ve had a number of AHA moments over the years – some of them from my own discoveries and others from fabulous PD – that have helped me see and do things differently.

For many years, I had the belief that I had to justify a grade rather than help students learn. I wanted to point out every single error so students would know exactly where they went wrong. But most of those comments never got read. The only thing most of my kids saw (or cared about) was the grade at the top.

The rest was just wasted ink and hours of my life that I’ll never get back.

Things I know to be true:
It’s taken my almost three decades to get to a place where I can honestly say that grading doesn’t make me crazy anymore, and it’s because I’ve come to accept these five things:

These realizations on my part do not mean that I’ve dropped my standards. Not at all. In fact, I can confidently say that my students are now learning more, and their writing is even better than when I was red-pen-and-rubric crazy.

Here’s what I do now: 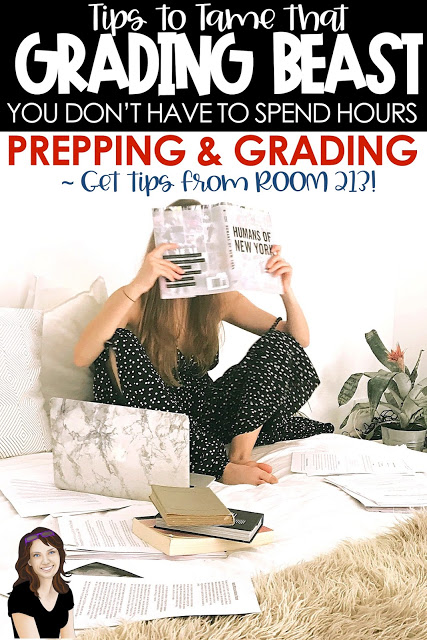 First, I decide which skills I will focus on and assess, and I keep it it simple.  As I said above, I used to feel that I had to justify a grade and I assessed everything in a paper — their content, analysis, idea development, sentence structure, diction, mechanics, etc.

Not only was I worried about justifying, I also thought the kids would ignore these things if I wasn’t laser focused on them. However, I’ve found that not to be the case. And don’t get me wrong: I still want my kids to work on all of those things, just not necessarily all at once – at least not until later in the semester when I want them to bring it all together in final assessments.

So, after a lot of experimenting and observing, I feel like I can pass on these suggestions for cutting back on the time you spend grading.

Tips to tame the grading beast:

1. Decide which skills you will focus on in the assignment. I’d suggest one to three at a time. For example, maybe you want the kids to get better at idea development and transitions. If so, make that your focus. Perhaps you’re teaching them to paraphrase research and to embed quotations. Grade those skills only.

2. Ask students to highlight where they have attempted to master that skill. Use comments on Google Docs or post-its on paper for them to explain either why they think they did well, or why they are still struggling. This does two things: it helps you quickly find the part of the assignment you want to assess, AND it puts the responsibility for proving skill attainment in the students’ hands – right where it should be.

3. Create a checklist or comment bank that has all of the comments that you would usually make for that type of assignment. You can get your kids to help you make it up, which is a powerful strategy; regardless, be sure to share it with them before they finish the assignment, so they know what you are assessing.

4. Read and assess the assignment. My students know that there are basics that are just expected at 12th grade – organization, one idea per paragraph, polished good copies, etc. They will be assessed on those things, but I will give feedback on the focused skills only — descriptive feedback that feeds forward. However, make sure this feedback is on your checklist – or in your comment bank. Then, you can quickly give that feedback.

5. Provide opportunity to use feedback. This, my friends, was the game-changer for me and my students. Once I made this a priority, my students’ writing got better. It’s just that simple. And, yes, I was worried about the time that would take, but I’m not any more. That’s another blog post that you can read here.

I hope that you can find something in here to help you spend less time grading student work, so that it doesn’t take up too much of your time. Please drop any comments, questions, concerns or tips in the comments!