Active Learning Strategy: Take it to the wall 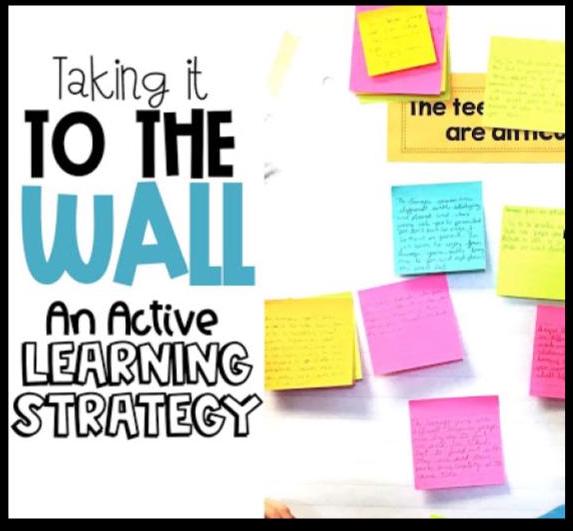 One of my favourite strategies for student engagement involves paper, stickies and a wall. Usually, I give students a question or a task that requires critical thinking and have them brainstorm ideas that they write on chart paper or sticky notes. I love this strategy because not only does it get kids up and out of their seats but it also requires that they collaborate and talk about their ideas as they do.

Recently, though, I’ve started using this strategy with independent work as well. For example, my international baccalaureate students needed more work on quotation analysis and I didn’t want to give them a worksheet that would require that they sit in their seats all class. So, instead, I chose ten different passages from Pride and Prejudice that I wanted them to analyze. I enlarged them on ledger paper and put them up on the walls of my classroom. 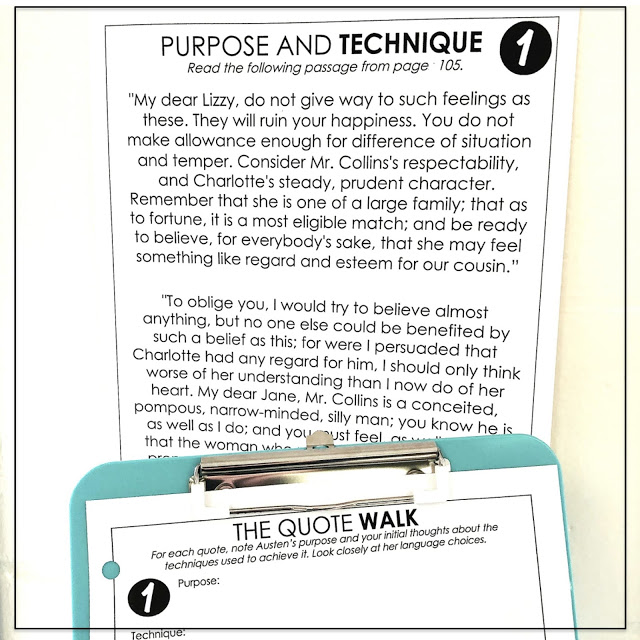 The students were given a corresponding task sheet instructing them to record the purpose of each passage, as well as the techniques Austen uses to achieve that purpose. I numbered the kids off and sent two of them to each poster. Whenever they finished one passage, they moved clockwise to the next one.

After they had a chance to finish, I put students in groups of four and assigned each group two of the passages. We moved the posters around so they could have room to work on the ones they were assigned. Each group was given highlighters and markers and were instructed to come to a consensus about Austen’s purpose in the passage. They wrote it across the top of the page and highlighted the most significant words and phrases in the passage. Finally, they presented their conclusions to the rest of the class (I could have added a gallery walk component to this, with each group revisiting the other posters, but I wanted them to practice their presenting skills as well). 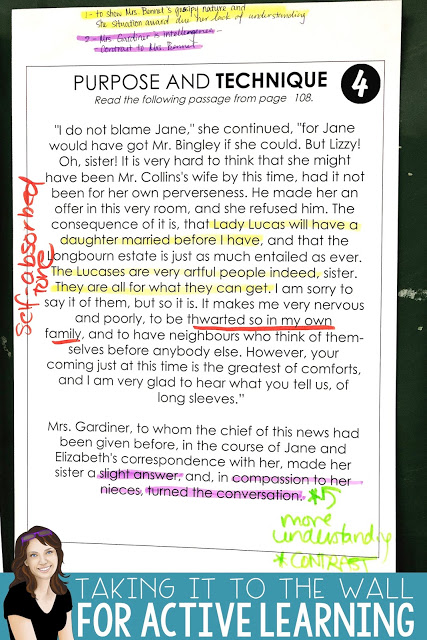 I really liked how this activity worked out. The students had a chance to reflect on each passage on their own before they discussed it as a group. They were able to stand back and look at the passage enlarged and isolated on the page; this seemed to really work for a lot of them, as it removed the distractions and allowed them to focus on the passage.

Science backs up my theory too, as several studies have shown that standing up while learning improves cognitive function. Moving around breaks up the class, gets the blood flowing and keeps students more engaged than when they are slouching at their desks. Also, because they need to move along when they finish, it’s more likely that students will stay on task. Concluding the activity with group consensus added another layer, as the kids were able to share their ideas and work together to analyze Austen’s words.

As many of you know, I’ve been using chart paper and stickies for years when my classes do group work. Now that I’ve tried it with individual work as well, my students will be “going to the wall” a lot.