We’re reading A Separate Peace in my Pre-IB class right now, and I’m drilling down on teaching them to write analytical statements — rather than summary. I’m also spending more time teaching them how to find good evidence.

My experience is that students can find a quote to back up a point, but they often stop short with just one, usually the easiest one to find. There’s a couple of problems with this: I want them to use multiple examples to fully develop their ideas, and when they use the first quote they find, they can often miss one that’s even better. 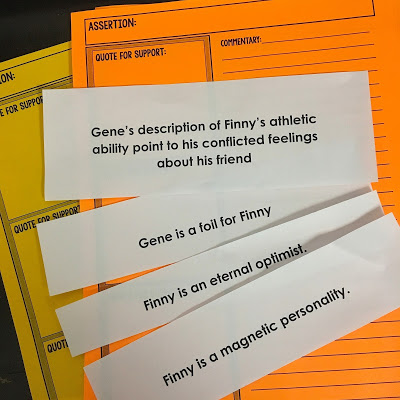 After we read the first four chapters of the novel, we did some work on learning the difference between factual and analytical statements. I had the kids brainstorm assertions about the first part of the book, then I put them in groups to find evidence to support the assertions (full disclosure: because it was the first part of the book, I gave them assertions I made ahead of time for the group activity. I wanted to make sure they were  on the right track!) 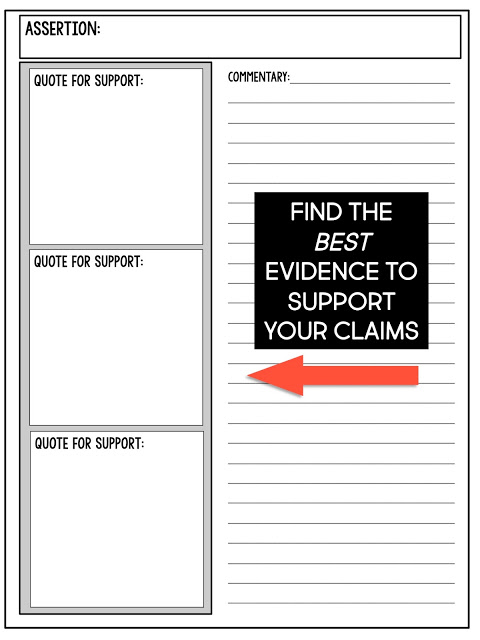 Each group was given a handout that looks like this. They wrote their assertions on the top and then had to look for evidence to support it. First, we spent some time discussing what makes a quote an effective one to use as proof. I told them that if they want to do this well, they’ll have to be willing to re-read and skim to look for ones that truly back up what they are trying to prove.

They took notes as they read and had to decide which of the quotes they found to include on the three sticky notes that would go on the handout. Before I gave them the stickies, we had a discussion about whether or not their evidence was good. If it wasn’t, I gave them some hints about where to look in the text.

Once they had their quotes on the stickies, they had to arrange them in the order they would use them to back up the assertion. Finally, they wrote their commentary on the side on the handout.

But we still weren’t done. I took all of the handouts that focused on one character and arranged them on chart paper, and did the same for the other character. We did a gallery walk, and finished with the students making assertions based on all of the evidence on the poster. 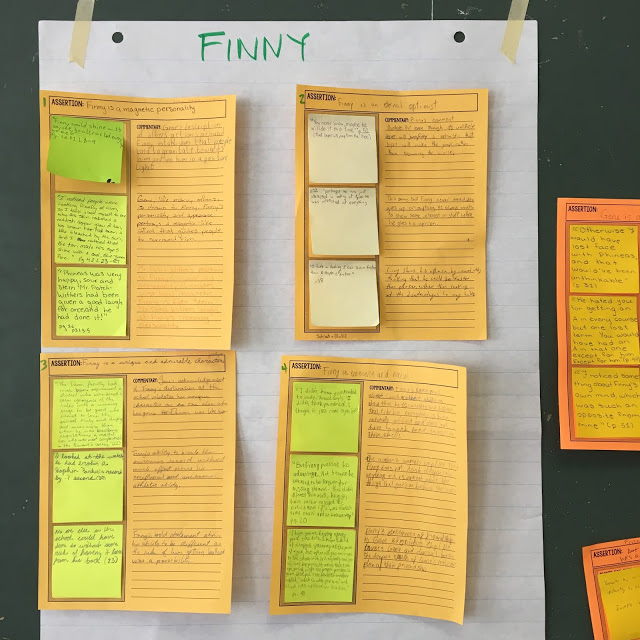 This process took longer that I initially thought it would — two full classes from start to finish. However, it was time very well spent. The students got a much better understanding of the process they should go through when they are searching for proof. I told them that they obviously couldn’t spend two classes backing up every point, but that they should remember the process when they are looking for evidence. I believe that the activity will also help them to recognize effective quotes when they take notes as they read.

Update: we moved on to To Kill a Mockingbird, and I was thrilled to see lots of carry over from this activity. Read what I did next here.

You can get more ideas for teaching analysis in my latest product: Teaching the Process for Literary Analysis. And, if you’d like more support with this and any of your teaching strategies, you can join my Facebook group: Strategies for Teaching Secondary English.