This year I wanted to switch things up. I usually end the semester with a formal debate, but given the cast of characters in my twelfth grade class, I was a little apprehensive about how well they would do. Not many of them were great at discussion; most put little effort into their work. I could foresee poorly researched and presented debates that would be torture for all of us.

Instead, I devised a plan to “force” them to follow the thinking process that should precede a debate, and called it a “Socratic Debate”. Here’s what I came up with:

In the past, I’ve found that students don’t always do enough thinking about a topic before they begin the process of planning for a debate — they just dive into the research and cling to an opinion that they form before they have any facts to base it on. Then, they grab at any details and quotes that will support this opinion, often without really spending the time to understand what the research tells them.

To prevent this, I decided to add a Socratic seminar phase before they planned their debates because it would allow them to explore a topic first. First of all, they filled in an exit ticket that asked them to supply some topics they’d like to debate. Then, I chose one topic per group of students (I had five groups of six) and began to look for some articles they could read that explored the issue. My goal was to find one article/student and to ensure that a variety of view points were represented.

Each student was given an article to read for homework. We were using Google Classroom, so they were instructed to underline or highlight important information in the reading and to use the comment option to frame questions they could use for a Socratic seminar the next day (they would use Chromebooks during the seminar so they didn’t need to print). I emphasized the fact that the purpose of the seminar was not to debate the topic, but to explore all sides of the issue. We practiced this in class, using an article about the Apple shareholders that are calling on a study on the impact of e-devices on youth.

The next day, each group conducted their seminars simultaneously as I walked around, observing. The students did not do them in front of the whole class for two reasons: we were running short on time, and I wanted them to feel comfortable exploring the issue without an audience — that was the purpose of this stage anyway, to have a meaningful discussion not to speak to the audience.

At the end of the class, the students had to do a reflection on: a) how they felt about the topic before the seminar and b) if their opinion was changed, and why or why not.

Finally, it was time to debate. I felt that, after the seminars, the kids were in a much better position to choose a side. However, their choices did not always result in evenly matched teams, with three on each side. I encouraged some to volunteer to take on the other side, explaining that a good debater must know both sides really well. I didn’t care if each side was perfectly even, either. My plan was not to have a formal, structured debate. Instead, I wanted the kids to learn to effectively debate an issue. What’s the difference? Well, most of us don’t find ourselves arguing a point in two to four minutes. We do, however, find ourselves having heated discussions where we have to defend our positions. The informal debate lends itself much better to training our kids to be able to do that.

To prepare for this debate, each student was given four index cards: two white ones and two coloured ones. They were to write the points they wanted to make in support of their view on the white cards (along with evidence and details); on the coloured cards, they wrote anticipated points from the opposition, as well as the evidence they would use to refute it. I gave them the index cards and insisted that they use on only them because I didn’t want them reading a speech.

On the day of the debate, I placed eight chairs at the front of the classroom. The six students in charge of the debate sat in the first six chairs, leaving the last two open — one was the hot seat and the other, the on deck chair. 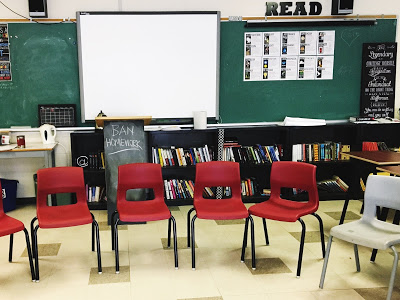 We started with the side in favour of the resolution. Students moved to the hot seat to make their points and waited their turn to speak in the on deck chair. After the each side had a turn to present their arguments, the rebuttal portion of the debate began, with students moving to the hot seat when they wanted to refute a point. Once the group had exhausted their arguments, members of the class were invited to take the hot seat to join in the debate.  They had been instructed to take notes of the points their classmates made and to choose a point they wanted to add to or refute. Things got really heated once the whole class got involved, I think because the group felt the heat was off them at that point!

It took us two days to get through each of the informal debates, and I was quite pleased with the results. The students seemed to be more engaged with the material than they had been in the past, and I watched them dialogue with each other, rather than just read prepared speeches that they had little engagement with.

If you’d like to try this process in your own classroom, you can check out my Socratic Debate product on TpT.