When we discuss theme in my classroom, I often compare it to doing a jigsaw puzzle: when you do one, you shake out all of the pieces, then look for the corners and edges to make a start. Next, you use the picture on the box to guide you as you fill in the rest. When you try to figure out the author’s overall purpose or message in a text, you are doing the same thing — without the picture on the box. So, when we look at texts in my room, we think of the different parts of a story as the pieces that we need to put together to get the whole picture.
I love teaching The Merchant of Venice because there are so many pieces to the puzzle–and many of these pieces are seemingly contradictory: the play has all the elements of a comedy, but there’s also evidence that it’s a tragedy. Shakespeare relies on the some of the Jewish stereotypes of his time, but he also explores Shylock’s humanity while emphasizing the negative character-istics of several of the Christians. It leaves one wondering: what is Shakespeare really saying with this play? So, as we discuss the scenes, I point out to my students that a certain aspect is one of the puzzle pieces we are collecting (Yes, Portia is a wise woman, but she’s a hypocrite as well. What is Shakespeare doing with her? Where does that piece fit?)

When we finished the whole play, I grouped students and told them to brainstorm a list of the puzzle pieces that we had discussed. After their list was complete, they had to decide which of the pieces were the corners and edges; in other words, which elements of the play were the most important ones in understanding Shakespeare’s overall purpose? Then, I gave them a pile of these ledger sized sheets, each with a blank puzzle piece on it.

Each student chose one element of the play to focus on. For example, one girl was looking at the intertwining plots in Merchant. Her task, for homework, was to record information about these plots on her puzzle piece, then to make a conclusion about how they might contribute to the overall purpose of the play. 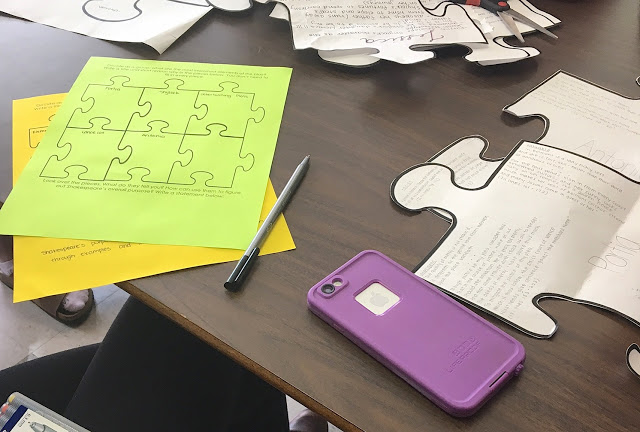 The next day, the groups were given more paper. This time, each group got two copies of a smaller page with linked puzzle pieces. They wrote the conclusion of each student on one of the pieces on the yellow sheet, and then had to discuss what they saw when everything was put together, and come up with an overall conclusion. This was the hardest part for them, because it required a great deal of critical thinking. But as I circulated, I heard some amazing discussions and debates. If I felt they were stuck, or going off in a bad direction, I’d stop and join the conversation. We’d discuss whether or not an element they chose was a piece of the puzzle –did they need to discard it? Use another one? At any point, they could make that decision.
Next, they started the whole process again on the green sheet. This time, I told them to look at it from a different angle and try to come up with a different conclusion. For example, had they been looking at the evidence and seeing Shakespeare as presenting Christians as superior, what would the puzzle look like if they were to argue that they were all very flawed? 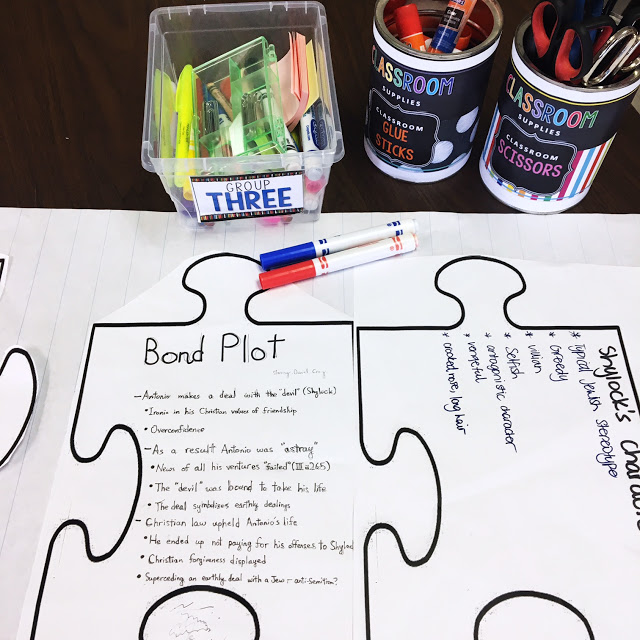 Finally, each group was given chart paper, scissors, markers and glue sticks so they could create their final puzzle. They decided on an overall conclusion, wrote it on the top of the paper, then arranged their puzzle pieces underneath. They hung their sheets on the walls of the classroom and did a quick presentation to the class about how and why they had reached their conclusion. Students walked around the room to look more closely at what other groups had concluded with their own copy of the sheet with the multiple puzzle pieces. That night, they were to create an outline for an essay that discusses Shakespeare’s purpose in the play, so I wanted them to have their own sheet to refer to as they worked on it.
This whole process took three classes, but it was time very well spent. The kids are going into this essay with a much better understanding of the play than I think any class has before.  I’ll find out for sure when I get that pile of essays in next week!
If you’d like a summary of the process, plus the puzzle pieces and handouts, click here. This was a process I did with an advanced group of high school students. If you’d like something similar, but a little simpler, check out my Discovering Theme Learning Stations.  I’ve also just posted some collaborative placemats for discussing theme, character and significant passages in The Merchant of Venice.

Don’t miss other freebies, lessons and ideas–sign up below for my newsletter and get my updates 🙂