1. TEACHING KIDS TO WRITE ABOUT LIT
and using scissors and crayons to do it

Literary analysis is hard, and writing about it is even harder. I teach IB and Pre-IB and even these (mostly) keen and able students struggle to write effective analysis that flows from one idea to the next. I’ve written before about how I scaffold the steps they need to analyze . In that post, I wrote of the need to let kids learn a process and that it’s ok for them to struggle.  This semester, we’ve spent a lot of time focused on the both the process and the struggle and now it’s time to get more serious about writing about lit.

Today, I’d like to share with you the things I’ve been doing with my classes to teach them how to write good literary paragraphs and essays.

I’ve learned over the years that good instruction is not enough. If I want my kids to learn to write a certain way, I need to give them a model shows them what I expect. This works even better when I find ways for them to interact with the model, beyond just reading it.

This week, we were finishing up A Separate Peace. They had done some group presentations on the themes of the novel, and I wanted to wrap things up with a paragraph that analyzes character. They were instructed to choose one character-istic of Gene or Finny, and to illustrate multiple ways Knowles developed this characteristic.

I wrote a sample literary paragraph; then, I blew each sentence of the paragraph up, and cut them into strips. Next, I clipped the strips together in random order. The students went into their usual groups and had to put the strips back into their proper order. 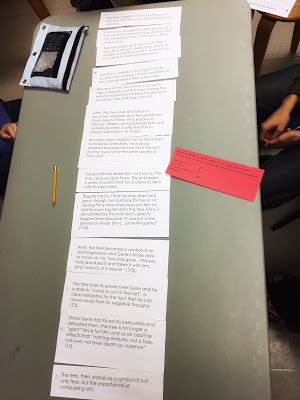 It was the first time I’d ever done this, and I loved how it worked. The kids were having great conversations:  this strip must come after that one because the transition refers back to that idea. I think this goes here because it develops the point made in that strip. I was so proud to hear them using the language and skills that I had taught them.

For homework, I gave them another paragraph that modelled what I wanted them to do for their assignment on character and had them label the following: 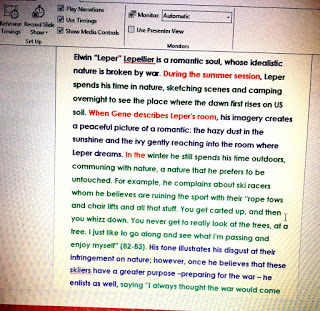 my assertion, plot used for context, plot used for evidence, analysis and transitions. Had I thought of it, I would have given them crayons to colour each of these things, but unfortunately I didn’t have that brainwave until later. However, I did colour-code my answer key, which I projected on the screen for them when we went over their work.

This approach is quite a departure from what I used to do in the early years of my teaching. I always used mentor texts, but they would be on a handout with the student instructions and we would just read through them together. Now, I make sure they have several opportunities to work with the model before they write. 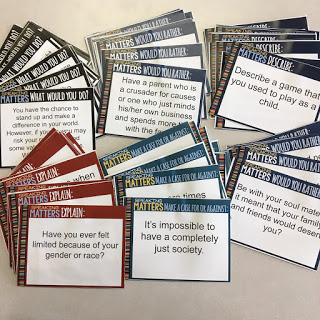 Last year, about this time, I wrote about using my To Kill a Mockingbird discussion stations, and I think it’s time to write about them again — and not just because that’s what my class is doing! No, I want to tell you about them because I know that they are a really effective way to get the students engaged with the text. More importantly, the cards allow them to discuss many different issues associated with the text in a way that a few pre-reading writing prompts never could. 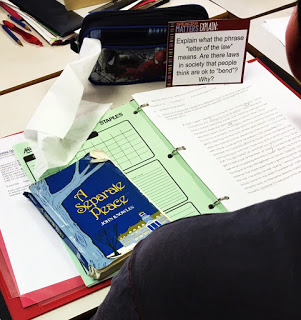 Yesterday, as I floated around between groups, I heard students who were highly engaged in their discussions; I even had to tell a few to turn the volume down a bit, because they were so excited about their debate.  The sweet thing is that they didn’t even know they were discussing the novel. But, when they do have their first novel discussion today, they will be able to draw on the ideas they explored during these pre-reading stations.

So, that’s what’s working in Room 213. Have you tried anything this week that you were excited about? Please share in the comments 🙂