We English teachers spend a lot of time teaching our kids to read and write, but I’m not sure that most of us (myself included) spend as much time explicitly teaching speaking and listening skills. Most times, we just assign a speech, presentation or debate and just kind of expect that our students will know what to do at the time. Or, we might just give a short review of the things they should do: maintain eye contact, speak slowly and clearly, use your voice and body for emphasis.

I know, that that’s pretty much all I ever did until the last couple of years, and I was often disappointed with my students’ presentations. More recently, I’ve come to accept that I was a big part of the problem.

I’ve always used lots of informal presentations in class, so kids could practice. I would give them an issue or topic to discuss, hand out chart paper and markers, and instruct them to record their ideas on the paper. Later, each group would take turns presenting their ideas. They would have a poster that was not well organized or easy to read — completely useless for the audience. However, they used the poster for themselves as a giant notepad: each speaker would turn from the audience toward the chart paper, and read off their portion of the presentation.

It was not engaging. And it was all my fault.

These skills would carry over to their formal presentations: poorly constructed slideshows and lots of reading from the screen. I decided it was time for me to start explicitly teaching speaking & listening skills and now I build time into my instruction to do just that.  Read on to see what I did this week with my kiddos:

So, on Monday, after my kids had passed in their latest writing assignment, I launched into my Disney unit, one of my favourite lessons to get them thinking about the world around them. This lesson points out the gender and racial stereotypes that occur in many of the older Disney movies, and then gets the kids to evaluate whether or not they’ve improved with newer ones. I told them that I was going to present some ideas that they may whole-heartedly agree or disagree with. Because it was also a listening exercise, I instructed them to write these points down in their notes, and to record examples that would support my points — or refute them.  I explain that they will need these notes for the discussions and activities that we will do as a class later.

Now because these are tenth graders who have not had a lot of experience with note-taking, I pause after the first few major points that I make, and ask them: what kinds of things did you write down?  If I think they’re taking notes on unnecessary info, I’ll tell them, and we’ll discuss why. I will also pause every now and then and remind them to write down examples that support or refute my points.

Depending on the class, I may ask them to pass these notes in.  When they know that I’m looking at them, then they are much more likely to do so. This group is pretty keen, though, so knowing they’d need the notes for later was enough.

After my lesson, I told the kids that I wanted them to discuss their responses in groups — reassuring that it was very ok to disagree with me. However, I wanted them to make sure that during their discussions the were adding to my points with more examples, or refuting them with different ones. I also wanted them to bring the discussion into other areas of the media, not just Disney. 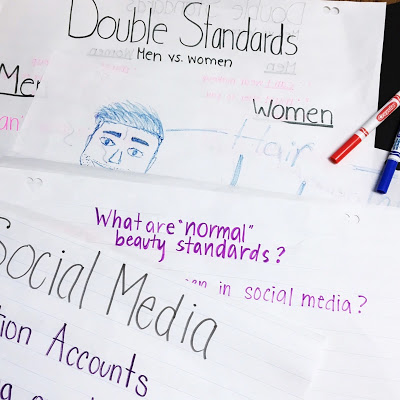 Once they’d had a chance to debate, I asked each group to pick an element of the media or pop culture, other than Disney, that promotes positive or negative messages to teens. I made sure each group was covering a different topic; then, instructed them to plan a short presentation for the rest of the class to share their ideas and observations. When I passed out the paper and the markers, I pointed out that the purpose of the paper is for the audience: it should have a title with their topic followed by bullet points that highlight what they want to tell the group. Heads nodded in agreement.

And then they all started writing their notes on the paper.

I stopped them mid-tracks and asked  them to repeat what I’d told them about the posters. They responded perfectly. But their chart paper told a different story.

“OK,” I said. “flip that paper over. Titles and bullets only.”

They complied, but it was a struggle, because they were fighting against old habits. Hard. 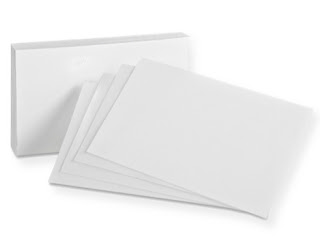 At that point I passed out the index cards that I had for them, and told them that each person should write their own notes on the cards. They took a few minutes to sort that out and complete the task. Then, I asked each person to summarize the point that was written on the card in a short phrase or “title”.

“That’s your bullet point,” I said. “It’s just a guide for the audience to follow, not something for you to refer to. You should look only at your index card — and the audience, of course.” 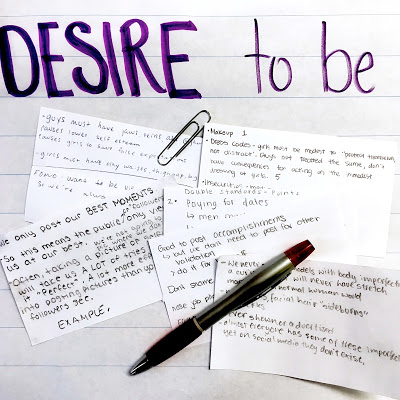 Once we got that figured out, the posters took shape and became useful tools for the audience.

It was time to present.

But there was one more bit of instruction: I told the audience members to take note of things they agree/disagree with, so we could have a full class discussion after each group shared their ideas. This keeps them engaged and, of course, listening.

We only got through half of the groups today, but I was very pleased with the results. It took more work to get there, but the posters were good, the students faced the audience, and we had great debates after each one.  Next we have to work on the “OK ums…”

(Note: these are informal discussions, for skill building only. When it’s time, we’ll move onto more formal presentations, and at that time, I will include a section in the rubric for listening skills. I also have students evaluate each other during group discussions, so they know that their ability to listen and contribute is being assessed.)

I’ve also changed my lessons to include a lot more speaking opportunities for my students. You can read about how I use group discussions to introduce To Kill a Mockingbird here.