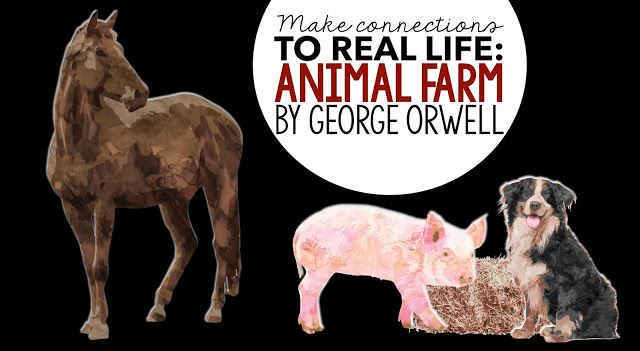 Unfortunately, George Orwell knew what he was talking about. His novella is not just a condemnation of what happened during the Russian Revolution; it’s a cautionary tale that can be applied to many events that happened since it was written, from political revolutions to student council elections. Unfortunately, it’s always relevant.

So when I walked into my classroom on Wednesday, November 9th, I knew I had to send my students to the library for the book. I had planned to do it later in the semester, but my Canadian kids were so fired up over the results of the American election, that I realized the iron was hot and it was time to strike. Things don’t always turn out the way you expect. Politicians and advertisers can be manipulative and deceptive, no matter what side they’re on (or what country they’re in). However, the most important lesson that comes from this text, in my opinion, is that we are all responsible. We all have to listen critically to what we hear. We all need to think and speak and act. 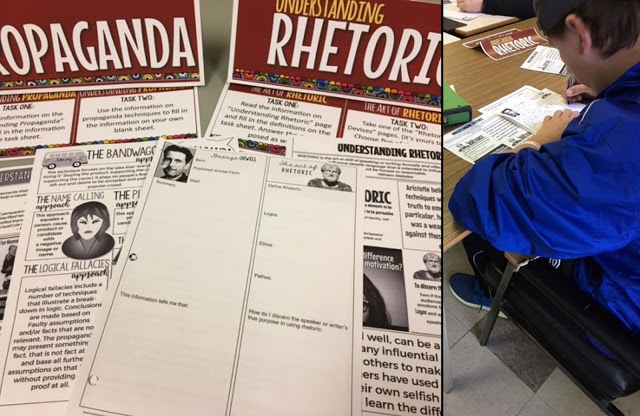 We started with learning stations so students could work independently to get the background information they need to understand what’s happening in Orwell’s allegory. Then, I always begin by reading the first chapter to them. We spend time looking at Old Major’s speech and talk about what makes it inspirational for the animals: he spoke to their very real fears and concerns with language rich in imagery and emotion. Before we delve into the rest of the book, I spend a few days looking at other inspirational speeches, like MLK’s dream speech. We learn how to use rhetoric and I assign them their own “dream speech”, where they have to write about an injustice in their lives and use rhetoric to present it persuasively. (Side note: there were moments of frustration for me here. So many of my kids could not think of an injustice. “Can we google it?” several asked…so sad. It shows not only their privilege, but their apathy. Hopefully they’ll learn a bit from Orwell’s message– apathy is not an option!).

For the rest of the novella, we focus on answering the inquiry question: what can we learn about human nature from the study of the text?  I ask students to read – not to answer chapter questions – but to take notes on the following: the corruption of the dream, the use of language for power and control, and the responsibility of the other animals.  After they’ve read several chapters, they meet in groups to discuss the notes they’ve taken. I circulate as they do so, directing them toward passages that they may have missed. We do this until the book is finished and then have a big discussion, followed by some assignments that they will do to illustrate what they’ve learned from their reading.

During and after reading, we’re making connections to real life. We look at advertisers and how adept they are at playing to our fears and other emotions. We look at other dictatorships since Orwell wrote the book, and at how even in democracies, politicians manipulate us. And, underlying all of that, is the fact that we let them. We are either not smart enough to see through their tactics or are too apathetic to care about it. It’s a cynical view, one represented by Benjamin in the novella, but it’s pretty darn accurate.

I like to get the kids to find these connections themselves, but I always help them along with this, by providing some links myself. This year, I assigned them Charles M. Blow’s opinion piece from The New York Times.  It was timely and perfect to use to assess whether or not they were understanding how to use rhetoric, as well as Orwell’s message. I copied the story onto a Google Doc  and had them highlight, in different colours, examples of rhetorical devices used by the writer. Then, I told them to write a short paragraph at the bottom of the doc, explaining why Orwell would be impressed with Blow. They had to reference not only his article, but examples from the novella. 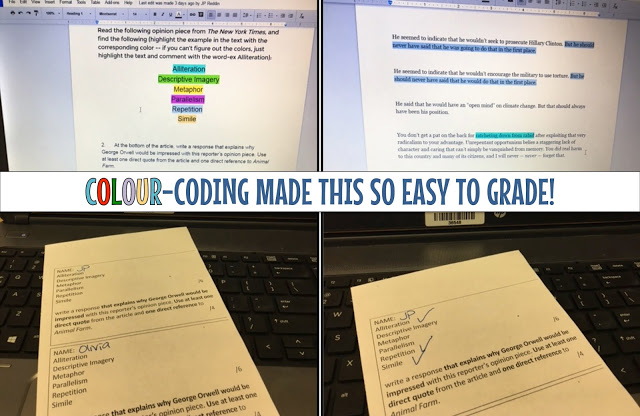 Because we did it on Google Docs, I had them highlight each rhetorical device in a different colour — took me no time to grade! 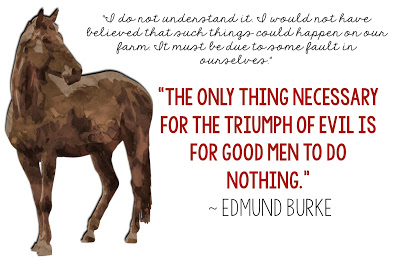 We’re still finishing up. The book has been read. Notes have been taken. Speeches are being written. Tomorrow I will assign their project, one that will ask them to use language to inspire positive change, not to manipulate. I’ll keep you posted on how my apathetic, privileged teens do…I’m hoping they rise to the occasion!

All of these are available in my Inquiry Unit on TpT.