I had a great week with Reader’s Workshop. Last week I focused my mini-lessons on the ways that authors develop character, so during our conferences, students had to illustrate their understanding of how this could be applied to their own novels. We had some great chats. And the whole time, I was thinking how much better conferencing is than grading a character analysis essay. The kids were illustrating their knowledge, backing up their points with evidence, and it was so much less painful for me! It’s also a great way to have some one on one time with the students.

I found out from several of them that they had finally found a book they liked to read. Two of them gushed that they couldn’t put the down the book they were reading  — and that had never happened to them before.  One girl, Delaney, had been reading Maze Runner and couldn’t follow the plot because she had trouble concentrating on all of the detail, she said. So I suggested Between Shades of Gray, by Ruta Sepetys, because not only is it a captivating story, but it has very short chapters.  Delaney loves it and is so excited about the fact that she now looks forward to reading.

So does Alex. Alex loves trucks and hunting and a good day’s work — but he’s never like to read. Someone recommended The Art of Racing in the Rain to him, and he started it reluctantly, only because he had to read something in class. During our conference, when I asked him whether he was reaching his reading goals, he told me that he was. He said that he couldn’t believe that he was reading this much each week, and that he hated when I said it was time to stop reading. “That’s not me,” he said in disbelief.

I finished the conferences that day feeling pretty satisfied.  We switched over to writing, and the kids were doing some group work. Alex, usually loves group work and is always in the middle of the discussion. However, that day, he had his book on his lap, trying to read it undetected. When I noticed, I told him that, while I loved the fact that he wanted to read, it was time to put it away. “But there’s only a few pages left!” he cried. “You have to let me keep reading!”

What could I say? Here’s a photo of Alex, finishing the book while his group mates carry on without him. He finished, and now he’s on to Twisted, by Laurie Halse Anderson. He’s liking it too! 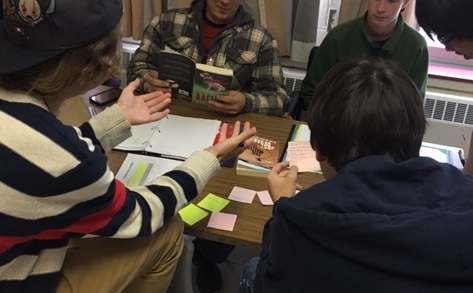 Not everyone has found their book or a good pace yet, but we’re getting there, one page at a time. The more I do reader’s workshop with my high school students, the more convinced I become that it’s the way to go.

Have you had any workshop victories that you’d like to share? Would you like to get some support as you plan a workshop approach in your secondary classroom? Join my Facebook group, Secondary Reader’s & Writer’s Workshop Support. Send me your email to [email protected], or search this link.