Decorating my Secondary Classroom: Before

The day has finally (and rapidly) arrived, the day that seemed so far away on June 30th, when the summer was sparkling ahead of me.  It’s back to school I go today, and I’m really not ready.  Luckily, I have two days of meetings and a long weekend before I meet my new crop of students.  When they walk in my door on Tuesday, I want them to cross into a warm and inviting place.

It’s not an easy task. Our school was renovated in 1991 and she’s pretty tired looking right now. Back then, someone decided that trendy was best, and chose to paint the doors and trim dusty rose and green — those were hot colours then, but they certainly aren’t now, especially when a lot of the paint is chipped and everything looks old.  It’s the same with my desks and curtains.  Old and droopy and very uninviting.  Note the lovely mix of chair colours. 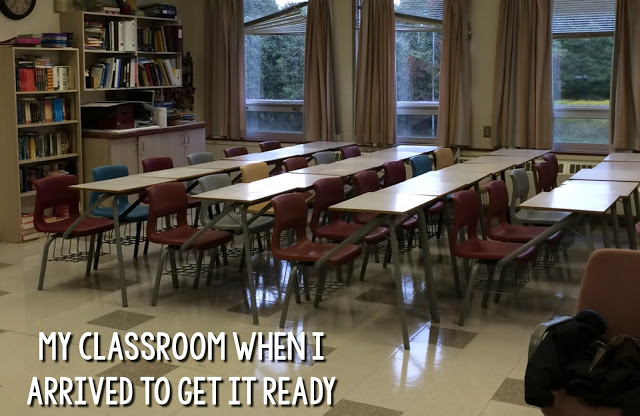 I don’t teach in a “poor” district; in fact, I teach in the richest neighbourhood in our city.  It’s just that there seems to be little money for capital expenditures and paint.  They spend the money on the students and on technology and on… well, the things that matter. Long story short: we have to work some magic to make our rooms look good! 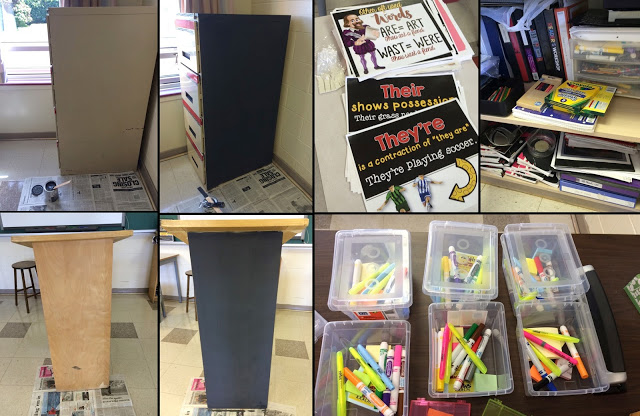 The first thing I did earlier this week was to put some chalk board paint on the side of my filing cabinet and my podium.  Currently, they are awaiting a second coat and a decision for what I will write on them — Quote of the day? Things to do? I will probably let the students decide (and control), but I’d still like to have something there for the first day.  I’m still thinking about that. 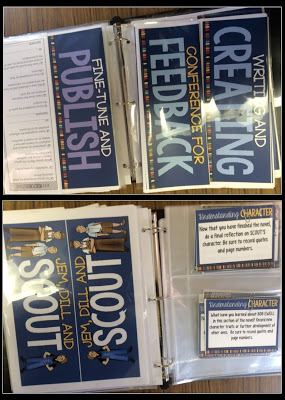 Next, I had to tackle the mess.  I am not the most organized and tend to just shove things on a shelf or in a cupboard with the intent of dealing with it later.  Often, in June, I tell myself I’ll deal with it in August, when I have more energy.  The top right photo above shows what’s behind one of my cupboard doors (cleaned up a little before I took the photo!).  The binders are full of disorganized chaos. The pic beside it shows a stack of posters that I use throughout the year, again shoved in a folder to deal with later. I still have a lot of organizing to do, and as usual, I’m vowing to do a better job all year.  I’ve already gotten my learning stations organized in a binder, rather than in the pile they inhabited for most of last year. It’s a start. And it will continue to be a struggle…
I’ve also started creating some group work kits. We do a lot of collaborative work, and I usually spend the first five minutes passing out markers, post-its, highlighters, etc.  In my effort to be more organized and efficient, I bought these containers at the dollar store, and loaded them with items that I think students will use when they work together.  It’s a work in progress, but I’m looking forward to seeing how it evolves.
So, that’s as far as I’ve gotten.  I have lots to do before Tuesday.  I will share my after photos when it’s all done!