THE JOY OF LEARNING: Helping your students think critically on their own. 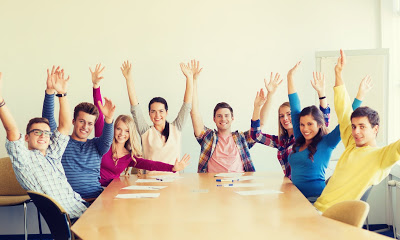 It was one of those learning moments that I wish I could have captured on video.

My tenth graders were working on a group presentation for the novel A Separate Peace.  Each group was give a question that started like this: How and why does John Knowles use… None of the questions had a quick and easy answer. Each one required a great deal of thinking and piecing ideas together.  Every group was struggling.

As  I circulated around the room I heard this a lot: “We don’t get it.  We have a lot of quotes and stuff from the book but we can’t put it all together.”  They wanted me to tell them what to do, but I wouldn’t.  Instead, I asked them what they knew already and then gave them one or two questions to deal with, ones that didn’t tell them anything, just guided them down a good path.

One group was given the task of answering How and why does Knowles contrast summer and winter? They were all over the place, but they were talking and thinking. They were also working in a group room that connects my classroom to my neighbour’s and, at one point,  I could hear them whooping and hollering in there.  I immediately went in to tell them to quiet down, because they would be disturbing the other class. When I opened the door I was met with all of their hands in the air and several of them yelling, “We got it!!!” 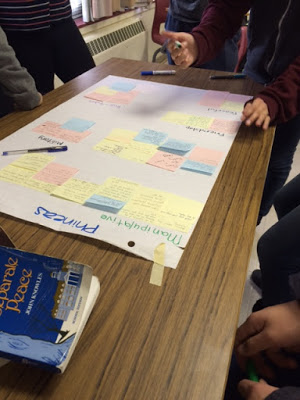 They proceeded to tell me their “answer” to the question, and before I could even ask they excitedly pointed out the evidence they had to back it up. They had their post-its lined up and organized and couldn’t wait to tell me how they came to their conclusion.

It was a teacher’s dream: students excited about their learning.  I just hope that the next time they get a challenging question that they recall that moment and how excited they were to figure something out on their own.

Here’s the procedure I followed for the activity:

1. Come up with a question that they will need to work to answer. In our case, we had been discussing and taking notes on the novel, and I knew that they had all of the ingredients to answer the questions, but that would have to do a lot of synthesizing of the information they had.

2. Students began with a quick-write so they could gather their thoughts individually before they met in their groups.  For me, this is a very important step because too many of them will just sit back and let the keeners take over in the groups. This way, everyone starts the thinking process.

3. I gave them post-it notes and told them to begin by putting ideas and/or quotes that related to the topic on the notes. I stressed that they shouldn’t worry about answering the question–just stay on topic and look for evidence.

4. Once they had a lot of ideas, I told them to start grouping similar ones together and then to start looking for patterns.

5. Up until this point, all was good. They felt confident in what they were doing.  But when I said it was time to start finding an answer (or answers) to the question, the struggle began.  They wanted a quick and easy one, and it just wasn’t possible. They had to talk it out, do a lot of thinking and a lot of debating.  As I said above, I wandered around, asking a probing question here and there, but never provided an “answer”.

It took us two full periods, but each group had their eureka moment.  Only one screamed and hollered over it, but I know that most were very pleased that they were able to come to a consensus on their own. The most powerful part of this exercise is that they were focused on the thinking process and learned that they had the tools to deal with a complex problem.

Their presentations are today.  They don’t know this yet, but there’s a part two to this activity.  Stay tuned.