The Joy of Leaning: Part Two

Last week I wrote about a “eureka moment” that some of my students had while working on their group presentations.  I told you that there was a part two to the assignment, and here it is:
After my students did their presentations, I had them summarize their conclusions, and wrote them down to project on the Smart Board.  I color-coded them and then asked the students: if each statement were a topic sentence in an essay, what would the thesis be? We did a “thesis-throw down” ala Caitlin Tucker, and had a great discussion about how to develop and fine-tune a thesis. (note: we didn’t spend any time evaluating each topic sentence; as long as they were in the right ball park, I wrote it down).

Once we had chosen the thesis statement, we decided on the best order to present the ideas. Because I had the sentences on the Smart Board, we could easily move them around and think about what worked best. 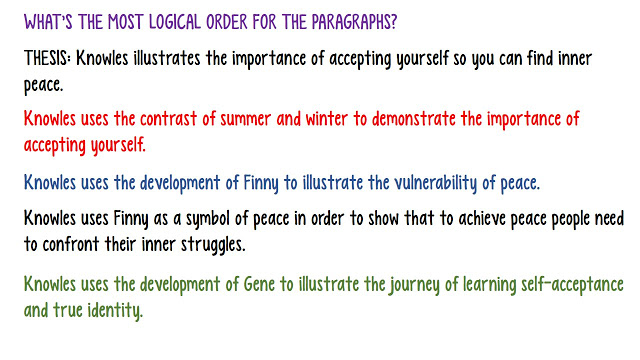 However, as students debated the order, it became clear that there was another issue: there was a lot of overlap in the topics.  I told them I knew this; in fact, it was part of my plan.  The topics worked fine for group presentations, but there were ideas that could be used for more than one topic, so organizing all of these as an essay would take more thought.  So, we discussed where the over lap would occur. They decided that the two middle points could be finessed into one, but that there would still be some possible overlaps if we were to actually write the essay.

They aren’t doing that, however. Not this time. I’m still building skills and confidence and so I want them to focus on just one topic for now.  They are going back to their original group topic, and each student will write on that only.  They’ll submit to Google Drive and I’ll give them some feedback before they do their good copies.

I’m being a tortoise with all of this, I know.  But, I am seeing a lot of progress with this slow and steady approach. I will have many of these students next year in the IB program; I know where I want them to be by next year, and I’m hoping that by the end of this semester they will feel more confident with writing  a literary analysis.