GETTING STUDENTS TO DIG DEEPER 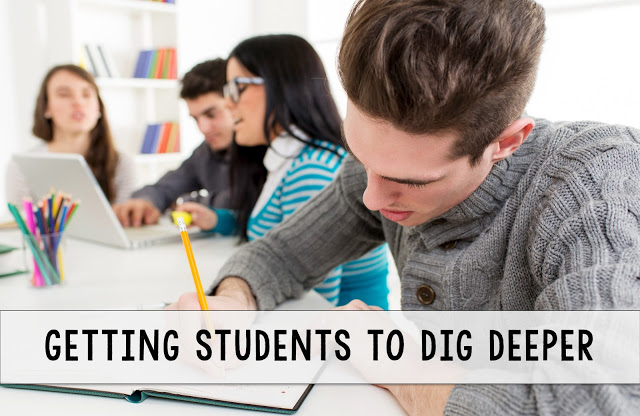 Last night at supper, my fifteen year old referred to me as “just a transferrer of knowledge.” I retorted that he was wrong; I was a facilitator of learning. You know fifteen year olds, so you can totally picture the eye rolling that occurred across the table. I couldn’t let him go with an eye roll, so I told him what I meant: I don’t think it’s my job to tell my students what I know about reading and writing. It’s my job to help them figure out what they know.

I realized today,  at the end of my tenth grade class, that I was practicing what I had preached the night before. It was a lesson that worked really well, so I’m sharing it with you:

1. The students came to class having read chapters nine-twelve in To Kill a Mockingbird.  We had a bunch of students away on a band trip, so they were told that they would be leading a discussion on the chapters with the rest of the class next week. I told them to form four groups and to have a twenty minute discussion about what they thought was most important in the chapters.

2. After they finished, I took one or two students from each group to form four new groups. Each group was assigned one of the chapters, and each student was given a sheet that said: “The purpose of chapter __ was….”

3.  Next, I told each student to think about the overall purpose of his/her assigned chapter.  Then, I told them to write for two minutes explaining their answer and their rationale. When the time was up, they passed their sheet to the student on their right. This time, I gave them three minutes, because the students had to read what the previous students had written, then add new points to back up what they said — or respectfully disagree and write why.  Regardless of which they did, they had to add new details to the sheet.  We repeated the process until each student wrote on each sheet. Then, the sheet was returned to the original writer so s/he could read the details that were added.

This technique, if you don’t know already, is called a WRITE-AROUND and is an excellent way to get kids to fully develop ideas. 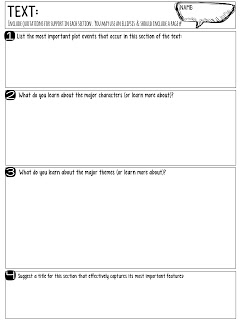 Next, I gave each group this sheet and had them focus on the specifics of their assigned chapter. The final question asks them to create a chapter title that captures the essence of the chapter and its purpose or lessons.  I told them not to just pick an obvious, easy title, but one that would really cover the important elements of the section they had been assigned.  They didn’t find it easy, but it was a good critical thinking exercise for them.

On Monday they will take the lead with the rest of the students after they return from the band trip. After wondering around today, listening to their discussions, I’m confident that they have the knowledge to do so.  I can wait to watch them facilitate the learning for their classmates.