SPEAKING, LISTENING & TEACHING ON THE FLY

SPEAKING AS PART OF THE LEARNING PROCESS:
Last week, my IB students started their study of Night.  It’s one of the texts from the Works in Translation part of the course, and they began with one group of students doing an interactive oral, a presentation on the cultural and contextual aspects of the work.  I was proud of the students who presented; they’ve come a long way in the last year.

Their prowess as speakers has been due in large part to their hard work, but also to the fact that I’ve put more emphasis on the speaking and listening strands of our curriculum. I’m very lucky to teach pre-IB as well, so I have most of these students for a year and a half. Right now, I have them right now, and we’re spending the semester getting them ready for next year. After several years of tweaking, I now spend a lot more class time on speaking skills, not just because they need them for major assessments, but also because I’ve come to realize what an essential part of the learning process speaking is. Many of us use talk to explore ideas–we need to speak and hear to work through complex problems.  It’s no different when it comes to formal learning. 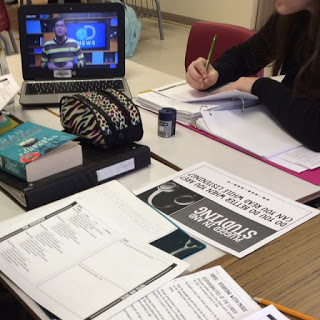 Many students are intimidated when it comes to speaking in front of the class, and yet too often we just throw them into speaking situations without cultivating the skills and confidence they need to speak in front of a large group of people. Small group discussions give them the chance to do something that may be uncomfortable in a safer environment.

My tenth grade class has been involved in a great deal of whole class discussion already, but I decided it was time to get more focused, and to start giving them feedback on their speaking and listening skills. Because they’ve been enjoying my other learning stations, I decided to create some for small group discussion.

Each of the discussion stations focused on a “hot topic” and included a sheet of instructions for the group leader.  The leader began the discussion by asking students to do a quick write and to share their initial thoughts on the topic. Then, they watched a short youtube clip and listened to the leader read them some facts that represented both sides of the issue.  Heated discussion ensued. After fifteen minutes or so, they filled out a peer assessment checklist, and then they all moved clockwise to the next station.

Time ran out before we could finish them all, and they begged me to finish up on Monday.  It was an easy thing to agree to after seeing how much they enjoyed them. 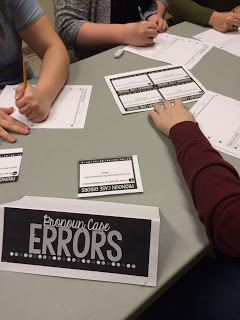 RESPONDING TO STUDENT ERRORS:
I used another station activity earlier in the week too, but not because I had planned to. Monday, before class, I was marking their persuasive essays, finding A LOT of pronoun errors.  So, I dug out my pronoun errors learning stations and quickly started moving desks together. Luckily, the photocopier was free. What followed was very interesting: instead of seeing kids quietly working on the stations, I heard heated discussions about pronoun use.  Many of them (sadly, and surprisingly) were seeing these rules for the first time. I didn’t do a full class lesson on any of the rules before hand, so they were working through them together. It was pretty neat, and emphasized something I know to be true, but don’t always do: kids learn more when they dive into it on their own.