Monday we will begin our first full week of the second semester. My grade ten class will still be in “warm up mode”; I’m setting the tone and pace of what I want our class to be like. I love a class full of discussion and critical thinking, but grade tens are not always ready to do that.  Often, they’d rather just put in their earbuds and work independently, but I’m having none of that.

In order to get them into discussion mode, I start the semester with non-fiction.  By choosing topics that are likely to engage teens, topics that they can easily agree and disagree with, I am more likely to get them engaged. I’ve also designed an activity that will require them to dig deeply into the topics: 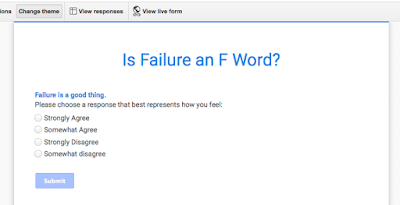 1. Start with a question that asks them to make a value judgement. Tomorrow’s question is: Failure can be a good thing. I plan to use a Google Form where they will choose from “strongly agree”, “somewhat agree”, etc. The second question on the form asks them do a three minute quick write that elaborates on their choice. (If you don’t have access to the technology to use Google Forms, you can do this just as easily with a writing prompt.) 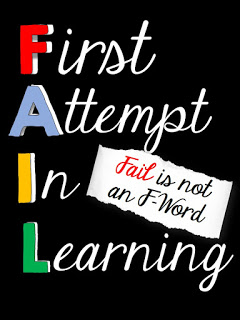 2. Gather students in groups of four-five to discuss their responses. The discussion will focus on the students’ initial feelings about the topic, before they read and view the information I have for them.

This is just the beginning of the exercise, however. I want them to work on several skills over the next few days: idea development, choosing and embedding quotations for support, building on others’ ideas, and disagreeing with others’ ideas. That last one is hard for teens.  They don’t like to disagree with each other, but it’s an important skill to learn how to do so constructively. Dealing with dissenting opinions is also important for fully thinking an idea through.

3. Give students something to read and/or view that explores the topic. To get this process rolling, I will give them several articles to read and videos to view that deal with the topic of failure.  I instruct them to read with a highlighter in hand so they can highlight good quotes — points they agree with or disagree with. With the videos, they will need to take notes. (Click HERE to access one of the articles I use).

4. Group students into “Response Groups.” I will put them in groups of four-five and send each student a blank Google Doc labeled “Failure, group one”,  “Failure, group two” etc. They will be instructed to post a response on their respective doc to the articles and videos, using at least two quotes to support their own points. Once each student has added his/her response to the doc, each student will have to comment on each group mate’s ideas.  I ask that they agree with one point — and add to it with another detail or example– and disagree with something and give a reason why.  If they can’t find something to disagree (or agree) with, they agree or disagree twice. If you don’t use Google Apps, they can do this on paper: have each student put a his/her response on a blank page and then pass it around the group for comments.

The purpose of the group exercise is that they start a conversation with each other, and then extend it with more ideas. Students will add further examples to those responses they agree with and they will throw out dissenting ideas that they will back up with evidence.  The disagreement element is key: it’s something they aren’t comfortable with, but when the teacher requires it, they feel safer and learn that it will actually lead to a good discussion.

5. After the group work, discuss the issue as a class.  Before we begin, I will ask the students to come up with good questions that they could pose to each other, so as to further delve into the topic, and then we will have a full class discussion/debate. They will have explored the ideas already, but now they have a chance to hear from the other groups. 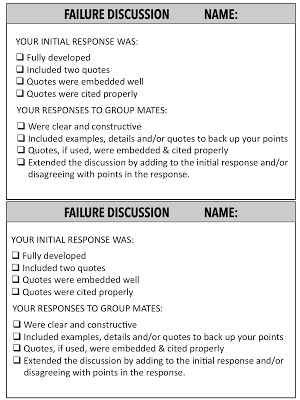 6. Assess the process.  This is an activity I will do several times, but I don’t give a summative mark; it’s a skill building activity that I use to get them ready for their persuasive research essays and debates.  Instead, I’ll give them some formative feedback on the process, letting them know if they’ve fully developed their ideas, used the quotes properly or if they’ve done a good job of extending the conversation with their group mates.

I’m looking forward to the activity. It’s a topic that they find engaging, and so it’s a good one to use for the skill building process I want to embark on.  Plus, I want to introduce the idea that it is ok to fail, because I want them to take risks over our semester together and I don’t want fear of failure to keep them from doing so.

If you’re looking for more ways to engage your students in critical thinking and discussion, check out my line of Learning Stations.