Writing is a thinking process.  I’ve said it many times.  I preach it to my kids. I make it a priority in my classroom by devoting time to the steps that they often rush through or ignore (it’s hard to do every one when you start the essay the night before). This week I’m focusing on the pre-writing stage of the writing process before they begin their essays.

FOCUS ON PRE-WRITING:
Students did some quick-writes to explore topics they are passionate about, so they can choose a topic for a persuasive essay. The next step is to create an outline to guide their rough draft. But before they work on their own outlines we completed the following exercise: 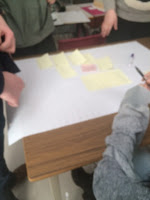 1. I gave my students a thesis: Smoking is a terrible habit. Then, I asked them to brainstorm all of the reasons why that statement is true.

2. They called out their reasons and I wrote them on the overhead.  Then we grouped similar topics and chose the best four. They chose:  it’s bad for your health, it affects your appearance, it’s harmful to others and  it’s expensive. 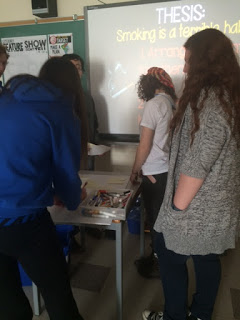 4. I told each student to brainstorm details that would back up the topic they had been assigned.  Then I gave them some post-it notes and told them to write one idea per sticky.

5. Each group was then given a piece of chart paper and told to group similar points/post-its together. Then, they had to place them on the sheet in the order that they would present the ideas in a paragraph.

6. The next step was for them to write a topic sentence at the top of the chart paper and a concluding one at the bottom. 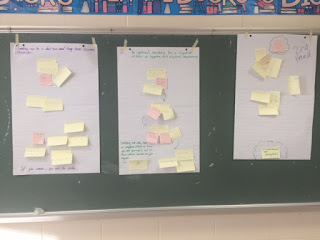 7. Once the groups had finished, I asked them to tape their paper on my board. Then, I asked them, if each piece of chart paper represents a paragraph in the essay, which order should they be on the board? They worked together to decide on the best order and then rearranged the pieces of paper.

When the exercise was done, I pointed out that what they had done was written a good, detailed outline for an essay.  At that point I handed out their outlines and told them to start filling them in for their own topics.

The pre-writing stage is complete. Their chart paper is still on the board; we’ll be using it later in the week to talk about how to write intros and conclusions, as well as how to tie the “paragraphs” together with transitions.  Stay tuned!