Learning Stations: One of my Favourites from 2015 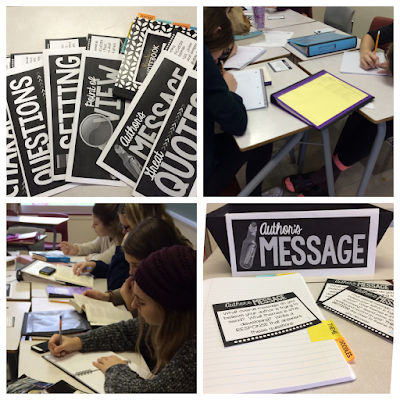 One of the biggest changes I made to my routine in 2015 was to use learning stations in my high school classroom.  The first one was created out of necessity.  I had been sick for a number of days in September and felt like I hadn’t given my students enough direction for using their reader’s notebooks.  I decided to make some stations to get them focused, and we all liked the activity so much that I went station crazy, and made a whole lot more.

Every time I create a new learning station, I think about a skill or concepts that I want my students to work on or understand. Then, I break the skills or ideas down into chunks to create the task cards.  For example, after we finished Macbeth, I wanted my students to organize all of their notes in terms of character development and theme.  Each station had them focus on either a major character or the themes of the play.  When they were revising essays, we had stations that broke down the revision process, so at one station they looked at their essays to see if they had variety in their writing, while at another, they looked at their word choice, etc. This worked really well, because it slowed down the process, one that they often rush through. 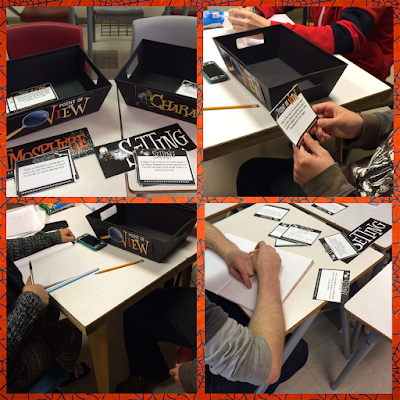 Using learning stations takes a little organization: I group my desks so we have one group per station and divide my class number by the number of stations. So, if I have six stations and twenty-four students, six groups of four will move through the stations. When I design the tasks, I do so in a way that order doesn’t matter. so the groups just start at one station and then after about ten minutes or so, they move clockwise to the next one. I always reserve time at the end of the class (or during the next one) for students to go back to stations that they did not finish.

I LOVE them for a variety of reasons:

1. Each station focuses students’ attention on a specific task, and because they have limited time at each one, they know they have to get the job done before they move on.  I have a chatty class, which is good when I want them to discuss things, but isn’t so great when I want them to settle in to do some written work. They can still chat at the stations, but they do so to help each other with the task. I am always pleased to see how well they work when we do stations, and I really believe it’s the fact that the work is divided into small, timed chunks that does the trick.

2. Learning stations give students an opportunity to get up and move around during class.  Left on their own, many will just meld to their chair and zone out, but when they have to move every ten minutes or so, they lose that option. Plus, movement helps the learning process and stations are another strategy I can use to get more action in my classes.

3. It’s a great way to add variety to your lessons and procedures.  Routine can be good, but so is variety. Even if you are asking the students to do the same work they would be doing in their seats, just by changing things up with stations you will get more engagement from your students.

4. My students love them, probably for all of the same reasons, and that’s a good thing.

As much as I love stations, we don’t do them every day.  I like to mix things up, so this is just one of the tools in my toolbox.  It’s one I go to when I know it’s time to buckle down and focus on certain skills or ideas, or to review and organize notes, as we did with Macbeth.

I now have quite a variety of learning stations available in my TpT store.  You can check them out by clicking the links below: