Writing is a Thinking Process 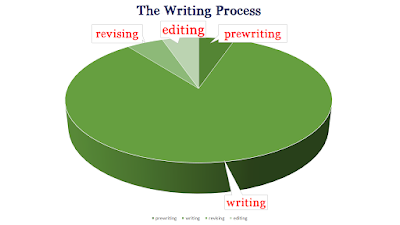 When students write, they want to get ‘er done.  The grab their pens or laptops, sit down and begin, often without spending a whole lot of time thinking about what it is they want to say. They just want to complete the assignment and pass it in.  As a result, their writing process looks like the graph above.   The biggest (and sometimes only) chunk of the pie is spent on the physical act of writing the essay. 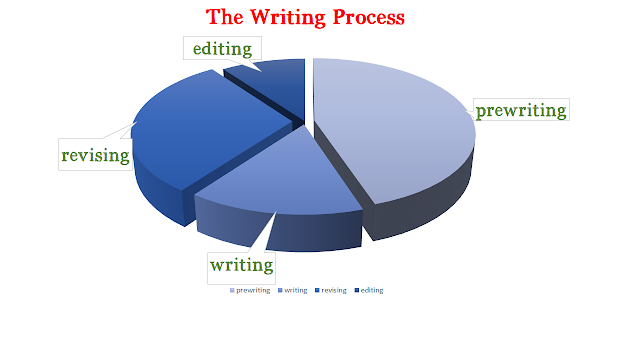 GUIDING STUDENTS THROUGH THE PROCESS
I’ve been on a mission in my classes to get my students to approach writing in a very different way. Instead of spending the bulk of their time on writing, I want them to devote the most time to thinking, whether that is in the pre-writing or revising stage.  I always maintain that the more time you spend planning your argument, the faster and easier it will be to write a good essay.  I harp on it. I model it. And often, they ignore me.

This became very obvious just this week when my grade eleven IB students were working on their Works in Translation essays.  These essays will be worth twenty-five percent of their final IB mark, and they are assessed by outside markers, not by me.  So there’s a lot of stress.  I can give them feedback on only their outlines and drafts, so that’s what we are focusing on until the end of the semester.  Last week they passed in mediocre outlines and this week they have been staring at the computer screens in the lab, hoping against hope that something brilliant will appear on the screen.  I kept telling them: think it through, talk it out, use post-it notes and do a visual of your essay. Blah. Blah. Blah. 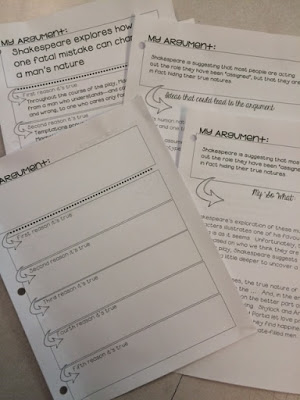 Well aware that they were so stressed over the assignment that they were ignoring what has worked for them in the past, I decided to have them take a step back.  I modeled the thinking process I would go through when writing a literary analysis.  I took care to write “rough” sentences and to model my thoughts and mistakes, not just a perfected copy. Then, I had them fill in the organizer with their argument and their supporting points–without their notes.  I told them that if they couldn’t write an outline without their notes, they had no business starting an essay.  We also spent some time thinking about good ways to lead into the thesis, so the intro doesn’t start with something broad, but completely irrelevant.  Finally, I wanted them to think about their “so what”?  Why is the argument important?

After they filled in their organizers, the real thinking began.  I put them in groups of four and told each person to explain his/her outline to the group. Then, group members were to give feedback, particularly on whether or not they could follow the argument.  I was amazed at the conversations I heard–it made my little English teacher heart sing 🙂 Light bulbs were coming on all over the room, as several students figured out why their essay wasn’t going anywhere. Theses were changed. Points were clarified. 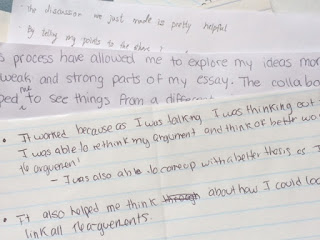 Afterward I had them fill out exit tickets to tell me what they thought of the process. All but one said it helped a great deal. Many commented on the fact that speaking their ideas out loud helped them clarify their thoughts.

Tomorrow, we go back to the computer lab.  I sure hope I hear nothing but flying fingers across the keyboards!

If you’d like to grab the graphic organizers , you can get them here.