My Favourite Ways to Start the Semester

It’s that time of year again for high school teachers: we are either finishing up a semester or starting a new one, so it’s like September all over again.  Last August I posted a series of entries on my old blog on favourite ways to start the year.  Here they are again:
I often mix things up, try new things or a different order of events, but I always start with a few activities that are designed to get my students’ heads in the game.  It’s a game I want them to play all year, one that has them engaged and open to new ideas.   I want them to think and to express their ideas freely, and I want them to be able to respectfully challenge the ideas of others.  Now, I’m not living in Utopia: I don’t always have a class full of  eager, vocal students–but at least I try to create an environment where they can be.  Over the years I have come up with several activities–or borrowed them from others–that I feel are good ones to start the semester, and I’m going to share them with you over the next couple of posts. 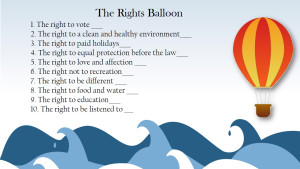 The first exercise I use is called The Rights Balloon game, an activity that I learned about at a conference years ago–I would give credit, but I can’t remember the guy who presented this wonderful idea.
This is how it works:
Instruct students to write the numbers 1 – 10 in a column on a piece of paper.  Project this picture and tell them that they need to use their imaginations, that they are alone in a hot air balloon, crossing the Atlantic Ocean.  The basket of the balloon contains ten very heavy boxes, each containing the ten rights listed on the screen.  So, one box has the right to vote, one has the right to a clean environment, etc.  All of a sudden, they realize that the balloon is going down and the only way to keep it in the air is to start throwing boxes over the side.  But there is a catch: once a box is removed, they will never have it in their lives again.  Ever.  If the right to vote goes over, they will never have that right again.  The game is this: they must quickly decide which boxes/rights they can most do without, and which ones they will hold onto until the bitter end.  Give them 60-90 seconds to decide.
Tell them not to bother writing down the rights, but just to record the order that they would throw out the boxes–if the right to vote would be the 7th box, they will write 7 beside #1, etc.  Remind them that #10 is the box they could do without the most; #1 is the most important one to them.
Once the are finished, tell them to quickly locate the first three boxes to go and have a discussion.  In my experience, they will almost always choose the right to vote, the right to paid holidays and  the right to equal protection before the law.  This isn’t a surprise in a North American classroom.  Most of them would never have had paid holidays, so they would be easy to give up, I point out.  However, if their parents did the same exercise, would they throw that away?  Not likely.   And what of the right to vote?  Again, most will never have had it–but would their parents throw it away?  Maybe…we tend to take for granted rights like that (voter turnout rates show us this).  However, I have had refugee students in my room, children whose families came to Canada to escape persecution in their native country.  Do they throw out the right to vote and to equal protection before the law?  Nope.  They are the last boxes to go.  We discuss these things:  does this mean Canadian teens/adults are spoiled and entitled?  Maybe.  Is one choice right and another wrong?  Hmmmm… What it means for sure is that our experiences taint our choices.  We believe things are important–or not–because of our experiences.
Next we look at the boxes that they held on to until the end.  Usually there is a smattering of interesting choices, but almost always, the class is divided between the right to food and water and the right to love and affection as their #1 box.  I have them put up their hands for a visual and ask the food and water people why they chose that one–and they look at me like I’m crazy.  “Isn’t it obvious?” They ask.  Well, then, I say, are the rest of these people crazy or incredibly stupid?  No, the love and affection people respond–if they can’t have love, they don’t want to live.  Ahhhhhh….. Again, we discuss the idea of our choices and values.  If all laws are being followed, there is no clear cut right and wrong.  We see things differently.  That’s a fact.  And it’s a fact that I want everyone to remember in my class so we can have discussions where everyone’s idea and beliefs are respected.  It’s a concept that often needs to be revisited, but all I have to do is remind them about the hot air balloon and they know that I want them to remember that we are all different.  And that’s ok.
If you want the powerpoint that I use, click HERE.
Do you have any favourite activities for the first of the year?  Leave me a comment if you do!
Check out my other favourite ways to start the year here: Part Two, Part Three and Part Four.