Getting kids excited about the idea of reading a full class text can be hard sometimes. But if you employ some pre-reading strategies, you get do just that.

My tenth grade pre-IB class has just finished the reader’s workshop component of our course, and we’re starting our first class novel, A Separate Peace, tomorrow. My kids loved reading their own novels, but because I have to prepare them for IB next year, it’s time to move on. A Separate Peace is a great text, but I know from past experience that it won’t grab them the way the independent novels did.

For this reason, and several others, I make sure we do some pre-reading exercises before we begin. Pre-reading is a strategy that taps into students’ prior knowledge and interests so they can make connections when they are reading. It’s also a way to prime them so they can look for clues to character and thematic development as they work through the novel. 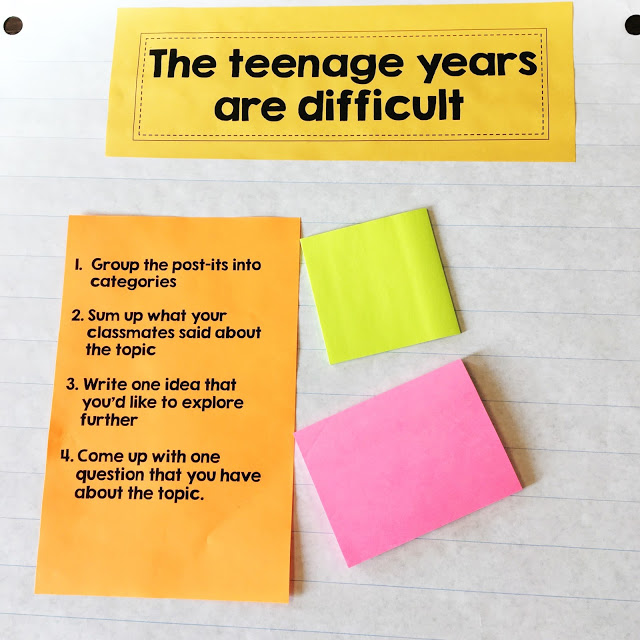 To do this pre-reading exercise, I gave each student five different sticky notes (one for each topic) and told them they would write down the first thing that came to their mind when I projected the topic on the board. They could write down an example, a question, a comment, etc. (Some wrote down definitions, which wasn’t what I was after. The next time I do this, I’ll tell them not to do so; instead, they should be writing some kind of reaction or response to the idea.)

As they were writing, I was putting up chart paper throughout the room, with the same topics at the top of each page. When the kids were finished, they placed their stickies on the appropriate piece of chart paper.

Next, I put the students in groups and gave them a sheet of instructions. They had to group all of the stickies into categories, and then try to come up with an umbrella statement that summed up the ideas contained on the stickies. This wasn’t always easy, because the kids were not given a great deal of direction about what to write (on purpose). I wanted them to be able to take a group of diverse ideas and work to find the connections between them. 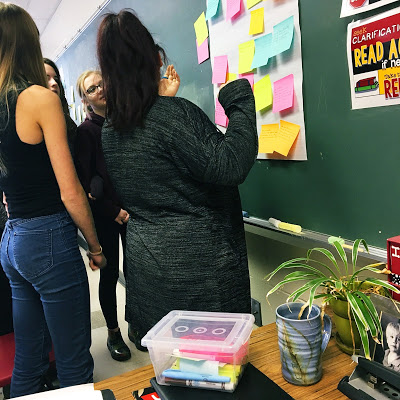 As I circulated among the groups I was pleased to see the strategies they employed. All five of them had outlier stickies placed off to the side on the wall, and they had ones with similar ideas stacked together. Once they organized those, some turned to the outliers to see if they could make them fit. A few groups tried to ignore these stickies, so I had conversations with  them to see whether that was a good idea: could they find a way to make them fit or should they actually be discarded? We talked about the fact that just ignoring an idea, because you don’t want to think about it, isn’t the best strategy.

Finally, each group had to write down an idea that they would like to explore in relation to the topic, as well as a question that they have. When all were finished, they went on a gallery walk to check out the other posters. 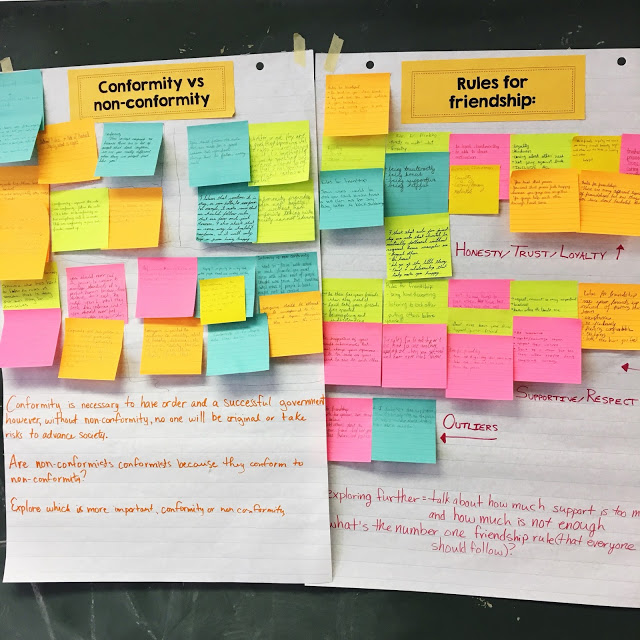 This pre-reading exercise got my students to think about ideas that they will encounter while reading the novel, but the connections will not stop there. I’m keeping the posters and after they’ve read a section, we will revisit them and add evidence from the text that relates to each topic. At that point, we will begin to put together ideas that will help students discover the themes of the novel. My hope is that they will see that the author’s message is not something that jumps off the page for them. I want them to know that figuring it out is a process that takes a great deal of critical thinking.