SPEAKING & LISTENING AS PART OF THE PRE-READING STAGE

I’ve been making a conscious effort to do more speaking activities in all of my classes.  First of all, the curriculum demands it, but secondly, and even more importantly, I know that speaking is a powerful tool for thinking.  When I need to figure something out, I need to talk about it.  So do my students.

We started Mockingbird this week, and as with most things I give kids to read, I never give them chapter questions; instead, they meet in groups after reading a section of the novel and discuss what they think is important, not what I guide them to think.  They had their first discussion today and it was, I believe, the best one I’ve observed in a long time.  And there’s a reason for that. 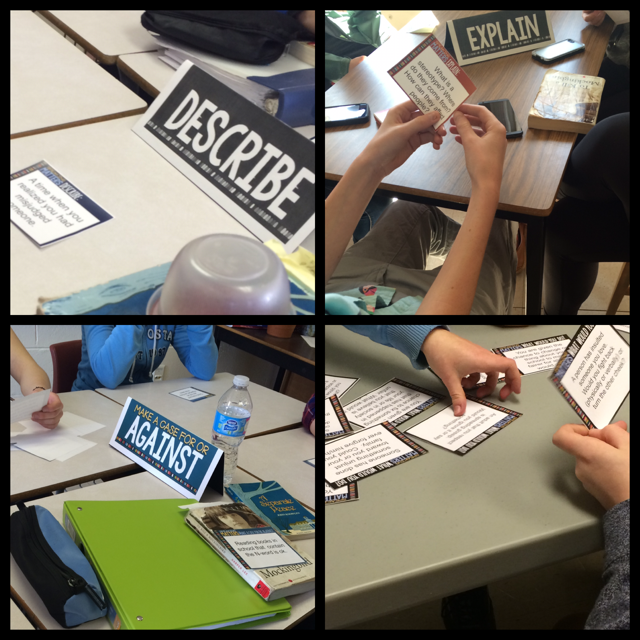 Yesterday, we started with discussion stations.  I had created a pile of task cards, grouped in a variety of categories, that had them thinking about issues in the book.  Categories included: What would you do, Make a case for and against, Would you rather? Explain and  Describe. Students moved in groups of five around the stations, selecting a card from the stack at each station. Each of them had to complete the speaking task on the card.  They had animated discussions and got into some of the really important concepts from the novel, like Is it OK to read books with the N-word? Or What does courage mean to you? 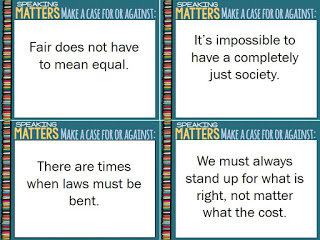 Then, today we had our first group discussion about the novel.  They were to have read the first four chapters and met to discuss what they believed to be important.  I’ve done this many times before, but this time I was hearing them bring in some of the ideas that we had discussed yesterday.  For example, instead of just discussing the rumors around Boo Radley, they were tying it in with the fear of the unknown.

After we had our full-class discussion, I asked them about this: Did the ideas you discussed yesterday influence what you talked about today? Twenty-six heads nodded, and several commented that the chats helped focus their discussion because those concepts were fresh in their minds.

Previously, I would begin my TKAM unit with some quick-writes, ones that focused on some of the ideas I had on the task cards.  But you can only do so many quick-writes, so only a few of the concepts get explored.  The discussion stations allowed students to explore multiple topics — and practice their speaking and listening skills.

The cards are available in my TpT store, but you can make up your own as well.  Just brainstorm the important ideas and concepts that are part of the text students are reading, then group them using the categories I listed above – or your own.  I had many options for each one, but as long as you have four – six for each station, then each student in each group can speak to a different topic.

At the beginning of each rotation, I gave them a minute to select a card and gather their thoughts. Then, each student had two minutes to speak to his/her topic.  This took approximately ten minutes per rotation.  We have seventy-five minutes together, so there was time at the end of the class to continue any discussion they found interesting.

I’m currently working on a set of discussion cards for Macbeth.  Let me know if you’d like to see some speaking activities for other texts!