My tenth graders are completing the final step of their writing process today for their persuasive essays. I’ve been taking them through a two week workshop designed to install the importance of process, and they have been working hard.  As a reward, I’m going to spend the last few days before March Break on one of my favourite lessons.  If you followed me at my old blog, you may remember this post that explains how I introduce critical analysis with Disney:
I’m starting my favorite unit with one of my classes tomorrow. I call it, very tongue-in-cheek, my “Disney is the Devil” unit, just to get them hooked. I tell my students that I am going to present some ideas that will challenge some of their happy childhood memories; I tell them that I will make some of them mad. And I do. But I also tell them that my kids were raised on Disney and that I love all of their musicals. How could both be true, I ask? They have to pay attention in order to get the answer to that question.

We start with a quick look at the older Disney classics. I put a chart on the overhead and we fill it in using Snow White, Cinderella, and Sleeping Beauty. We quickly see a pattern: rich, white, teenage beauties are in competition with another woman for the attention of the very static – but rich and hot – Prince Charming. The teenage beauty needs rescuing but, of course, emerges victorious and is rewarded for her sweetness and beauty with happily-ever-after. My students see the pattern, but are quick to point out that these movies are old, really old, created during a time when our beliefs about gender roles were different. Yes, I concede.
And then I show them some clips from more modern movies.
Ariel, the beautiful mermaid is a much more modern woman. She wants to be independent, to break free from her world. In fact, she rescues the prince in a wonderful role reversal. And then she gives up her voice and another very essential part of herself – the whole lower half of her body – to be with him. And what of Belle, the beautiful, book-loving heroine who rejects Gaston, a “perfect” male specimen, because he is actually a jerk, and falls in love with the beast for who he is on the inside? What an improvement: she’s smart and she loves people for who they are! Yes, and the reward for her awesomeness is a rich, handsome, prince with a castle. Happily ever after for her too!
By this time, I have a few of my students nodding their heads in agreement with me; some are even anticipating where I am going before I get there (I love to see the wheels start turning!). Many, however, are protesting loudly. I tell them to be patient; I’m not done. I want them to keep an open mind, to listen, and to make their own judgments as they go. Critical thinking at its best.

Another element I ask them to analyze is the way the Disney heroine looks compared to the other women in the movie.  While the other women might be attractive, none are ever as drop-dead gorgeous as the leading lady. Unless of course, she is the aging cougar who can’t quite take the competition anymore, especially when her mirror points out that she’s no longer the fairest in the land. An excellent example of this can be found in Pocahontas. First of all, the real 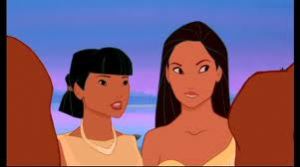 Pocahontas looked like the this. Her story was captivating enough to be told several times on the big screen, but obviously her face was not. Also, compare Disney’s version to her best friend. Her friend is very cute, but she is not a ravishing beauty–because she isn’t the hero.
So, what? My students exclaim. Who wants to see a movie where the main characters are “ugly”?   So, what, indeed. What does that tell us the viewers? Do you have to be gorgeous to be the hero of the story? Most of us are not incredibly beautiful–does that mean that we can’t be the hero of our story? Are we all relegated to the role of cute and/or helpful sidekick?
And what about racism? Not Disney, surely? I show my students this clip from Peter Pan (What Makes the Red Man Red?) and ask them to consider what might be wrong:

Really? Is that an accurate portrayal of the Indigenous Peoples of North America? Or is every stereotype jammed into that number? And why is it that all of the natives are bright red caricatures while Tiger Lily is a more accurate, and much more attractive version? Could it be because Peter Pan, the hero, has a crush on her?

Ok. Ok. It was the 1950’s. We know better now. Pocahontas, for example, is a more accurate portrayal, one that illustrates that the white man was actually the bad guy. But what about Aladdin? Watch it closely. Aladdin and Jasmine, despite being the same race as all of the other characters, look far more “white” than the rest – and they speak without an accent. But they are the heroes–little kids are watching and they may not understand the accents, my students protest. They understand Jaffar, don’t they? I counter.  Jaffar, the bad guy, who is actually the “ugliest” and darkest of the main characters. In fact, the more villainous the character, the darker and more caricatured they are. Hmmmm…..
By this time I have some students who are very agitated.  They think I’m digging too deep, throwing a bunch of feminist and liberal missiles at their favorite childhood movies. At that point I start pulling in some other childhood favorites, like good old Barbie.  The woman who couldn’t stand up if she were real, as she would not be anatomically able to do so. I have a magazine with the headline Stars Caught Without Their Makeup! , the cover graced with pictures of celebrities looking, actually, normal.  However they had the audacity to go out of their house bare-faced and pony-tailed.  I ask them to think of examples–including newer Disney movies–that support or counter my points.  Great discussion ensues.
At that point, I put the kids in groups and have them brainstorm newer Disney creations (and other TV shows or movies) that support or refute the points I was making, and they do an informal presentation to the rest of the class.
What do all of these things, Disney and other cartoons, fashion magazines, most TV and movies, teach us?  That happily ever after is reserved for the most beautiful, most heroic, most “white” looking of us?  Where do our ideas that we must look a certain way come from?  Does the media, and even Disney, contribute to our sometimes messed up values and self-esteem?  I think it does.
Finally, after all of this, I remind my students that I love Disney, that my daughter (who is pursuing a career in musical theater) spent her childhood watching the cartoons and pretending she was the characters.  How can all that be when I truly believe that kids are given bad messages mixed in with all of the great stories and tunes?   The answer is simple.  We don’t live in a bubble and our kids certainly should not.  We are all bombarded with messages constantly that present ideas and values that aren’t so great.  But we are also bombarded with great ideas too, and it is so important to be able to discern the difference.  When my daughter was watching these movies, I would talk to her about these things, in age-appropriate ways.
We need to critically evaluate the media, not just the texts that we study in school.  So, using the media as text can be a wonderful jumping off point to not only get your students engaged and thinking critically, but also as one to get them to challenge the messages they get every day.